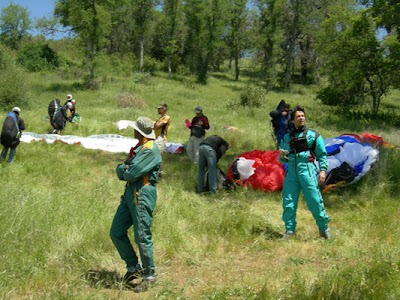 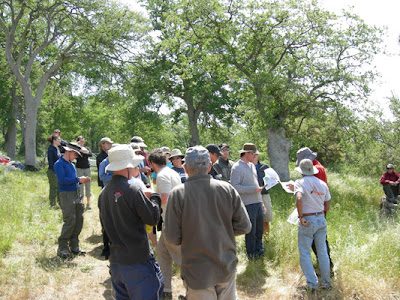 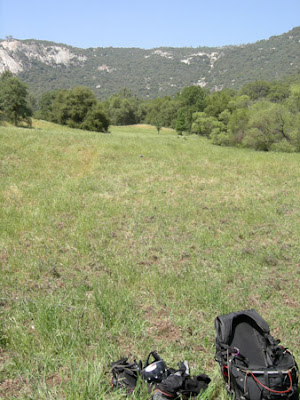 The weather looked good & the turnout was great. We had quite a few nationally ranked pilots & at least 10 DHV2/3 & comp wings. I was there with Patrick, Eric & Sharon, & Dave S. This was likely to be my last XC comp prior to the Rat Race and US Nationals in June, so I was hoping to do some good flying & practice team flying with Dave & Patrick.

Jug & Co. set a good task for Saturday - A 34 mile task starting with a triangle in the valley & then a run down Sandy Ridge (above the four lane of 168) then down to Humphrey Station & then to Kaktus... Dave did the best distance in our group & got to the turn-point at 4-lane-turn and then ended up at the High School. I got impatient after circling a long time over Tit, & decided to try a glide into an area with no other wings. I chock this up as a "bone-headed decision". I got shot down heading to the 4-L-T point. Just before my old climbing slab "Square Nails", I had to land in a small meadow above the Tollhouse market. I enforced a 1 mile walk back to the LZ as penance for my making only 7 miles or so. Tomorrow I will be patient.

I had an exciting launch into a thermal but climb out was fine & I had a good start. The winds were NW @ 7-9 mph at 5300' top-of-climb and there was some good sink between thermals. I picked my way to Squaws Tit & then to the LZ - back to launch & the a return to Tit. Again I got stuck at Tit for 15 minutes & then Jeff W. came along & we worked some lift together until it was time to head to Black Mtn. & over to Nichols. Along the way I found some lift & felt like things were working out well. Wings in the lead gaggle were not that far ahead & not doing that well.

When Jeff & I got to Black, we were joined by Jug & the three of us worked some lift on the Southern ridge on Black. Jeff decided to head out & Jug & I stayed to eek out the last 500' from a 300'/min. thermal. When we headed over the ridge to Nichols, Jeff looked like a goner, low over dry fields with evenly space trees. His landing looked like it would be a Jedi flight through the trees. As jug & I flew SW there were nice areas of reduced sink & lift that ran parallel to the wind-lines. Unfortunately this only lasted a couple miles.

By this time we were above Jeff, who had hooked a solid climb & was approaching our altitude. The 3 of us team flew 4 more miles until Jeff & I were coring a thermal & Jug went in search of better. He looked like he had gone on a death glide, so I continued working every bit of lift I could find. At this point Josh C. came by & extracted 500' from a thermal I was working & he & I rolled out to glide to the TP together. Josh's Targa 3 sure is a nice wing - he just 'flew away' from me as we glided to Nichols.

Dave had a bad day. His Competino had a malfunction & threw his game off. Too bad because Dave & I were close for a while today.

I feel much better about the way I flew today - my pacing is getting better & I flew well with the boys. In all, 14 tough miles.
Posted by Tim at Sunday, May 13, 2007
Email ThisBlogThis!Share to TwitterShare to FacebookShare to Pinterest