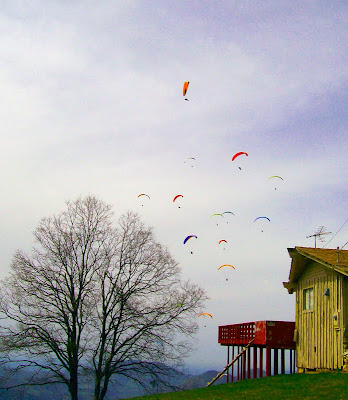 FRIDAY
I usually listen to talking books while driving down the road. Friday I was headed to Dunlap for the first XC weekend of the 2010 season when my Dean Koonts novel had just come to a rather creepy termination.  I fired up the Sirius receiver & tuned in some Classic Rock. Soon Bob Segar was singing a medley from a live performance in 1972. I have to admit, that guy had some serious talent.  Something about the tune really haunted me & I found myself humming the tune all weekend long.

So anyway, I arrived in the Dunlap valley at 2pm and was hoping for a ride to launch for a quick flight before making camp.  I headed for Dan's to see if I could swing a ride up the hill.  I talked briefly with Greg, found that I was the only pilot going up, and soon was riding with a gal named Day to launch.  When I got to launch I ran into Tim & Scott.  I gave them a bit of local beta and set up to fly.
The lift was a bit 'edgy' but went to cloudbase at 6000'.  I boated around on the Boom 5, enjoying the opportunity to fly high enough to experiment.  This was also my first flight of any duration on the new harness (a WV X-Rated 5) so I was able to make some adjustments and figure out how to make this harness a part of my "XC System."

Tim & Scott soon launched and we all ended up at Dan's and, later, shared some beers and burgers at a local Dunlap dive.  Thanks for the beer guys! 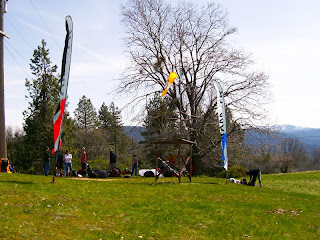 SATURDAY
Saturday I woke, after a great night's sleep in my pop-up, and headed down to the valley floor to meet the crew.  There were quite a few pilots from all over - Reno, SoCal, Sac, SF, Santa Cruz, Tahoe, etc. We had at least 25 - a great turnout!  I had 4 mentees in attendance; Dudi, Stephan, Brad, and Aaron.  We all headed up the hill knowing that the day looked a bit weak and inverted.  We did quite a bit of site intro for the new pilots and worked with our mentees a bit.  I figured we would need to do most of our work after the task was called.  We built a rather short (34km) task, that had more than one crux. as it crossed the valley four times.  Given the low climbs of 4500-5000', there were many opportunities to dirt early in the task. 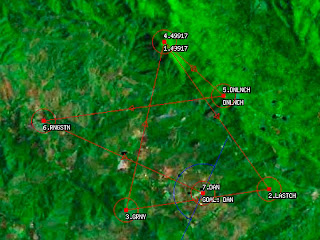 I launched early & had a decent start.  The gaggle wasn't very high so the first beat up to 49917 was sketchy and many of us were low on the face of the mountain, ridge soaring around the corner to try to tag the cylinder.  I was 50 meters too low to tag the turnpoint on my first pass, so I went back for another figure'8' in a bubble and tagged it next pass.  It was low and desperate most of the way down to last chance.  Fortunately I had caught a few of the lead gaggle and we worked together to find a bubble and climb enough to tag Last Chance & get back to the main ridge.  Those that stayed on LC to work the weak lift soon worked their way down to a landing at Dan's. . .


I got myself stuck at the ridge for a bit and worked slowly (cautiously) along the ridge, lower than I like.  My goal was to get to the house thermals in front of launch.  I don't like flying low like this with my limited experience on the Boom 5, but it was this kind of day -


I caught a nice 4-500'/min. thermal in front of launch and soon rejoined my high aspect ratio buds.  We all headed across to Granny's Knob together and found a sweet thermal that gave us (almost) enough altitude to get across to the main ridge again.  Josh and I headed out together and I aimed for a rock face that I hoped would provide some heat.  Josh got there with about 400' more than I and had an easier go of it, but I was able to get up, in time.  My thermalling still isn't as accurate or comfortable as it was on the Avax XC2 - maybe due to the much heavier brake pressure, maybe due to lack of familiarity.  At this point Josh took off and hit 49917, DNLCH and went on glide for goal.  I hit 49917 & DNLCH  but couldn't get high enough to head out on final glide, so I headed back up to 49917 for some additional altitude.  This cost quite a bit of time, but by now I realized that the task was over for all but Josh & me.  Unfortunately I couldn't get high enough to get a 'glide-to-goal' of less than 14:1.  I searched in vain & watched as the CirroStratus slowly shut the day off.  Finally I decided to head for RNGSTN with the intention of scoring a bit of lift at the knob between Turkey and the ranger station.  The prevailing wind would provide drift towards goal as I surfed the cow farts, so there was some hope. . .


I hit the RNGSTN turnpoint with exactly 1000 meters of altitude (about 400meters AGL) and a glide req'd to goal of 20:1.  No bumps were felt all the way to the ground.  I landed in the Turkey farm relics, a little over a mile from goal..


Josh made goal and Susan did a great job, making it to the ranger station.  It was definitely a day that required an awareness of pacing to match the conditions. 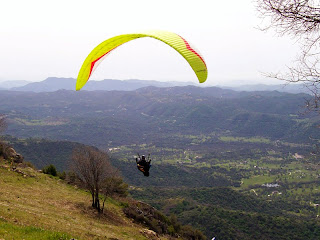 I think many of the new pilots were a little frustrated with the day.  The task made them attempt crossings they wouldn't have if they were free-flying.  This is one of the primary differences between flying the path of least resistance and flying a prescribed task.  Much of the initial (steep) learning curve is spent learning this pacing aspect of flying a task, and planning tactics to get around the course.  Watching more adept pilots is very helpful in both of these skills.


SUNDAY
Because the first task was found by most to be a tough one, and because Sunday's forecast was very similar, we decided a "Do-Over" task would be valuable.  The same task was called with a bigger radius at RNGSTN.  In reality, the day turned out to be very weak, and we weren't getting the climbs we got the day before.  I tried a hail-mary from Granny's Knob back to the main ridge and found only teaser-lift.  I dragged much of the lead gaggle with me & we all ended our day at the St. Nicolas Ranch LZ.


I feel the weekend was a great shake-out for all the guys with new equipment & wings, and a great intro to the comp format for the new guys and gals.  Next time it will be less intimidating and they will have a feel for the pacing of the day and the flight. 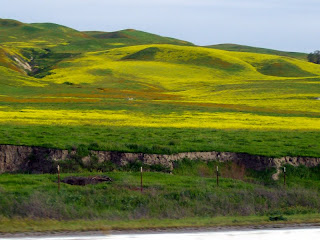 As I drove home, and recapped the weekend, filled with people, laughs, flying and fun - I realized that I was still humming that Pete Segar tune - It was the Travelin' Man/Beautiful Loser medly . . .
I feel the traces they've left on my soul Those are the memories that make me a wealthy soul-