Once again the day dawned cold and cloudy in Sun Valley.  The forecast wasn't very encouraging but we headed up to launch with an optimistic attitude, ready to fly above this amazing scenery.


Upon reaching the summit, we found ourselves in the base of the clouds at 32°F. Soon the sun was peeking through, and cloudbase lifted a bit, so the task committee build a task similar to yesterday's aborted task with an upwind return to DURLZ for a total distance of 50 Kilometers. 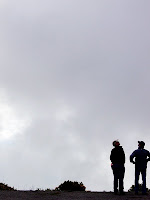 Initially a 2:15 start time was set and we all headed for the launch area.  The winds were quite cross at launch and, when the wind-techs got into the air, proved to be quite strong from the South in the valley.

The winds continued to freshen and were about 60° to 90° crossed so the meet director put the launch on hold.  After putting launch on hold for a while, and consulting with the safety committee, Meet Director Dave Glover cancelled the task.

It's disappointing, for everyone, to start a comp with two cancelled days.  Mike Pfau has been very generous with pizza and beer for the idle troops while spending our "down-time" in Sun Valley and Ketchum.  Tomorrow looks unlikely as a taskable day but we will be in position if conditions allow us to fly and compete.

Thursday through Sunday are looking much better and we hope to see the area from the air soon.