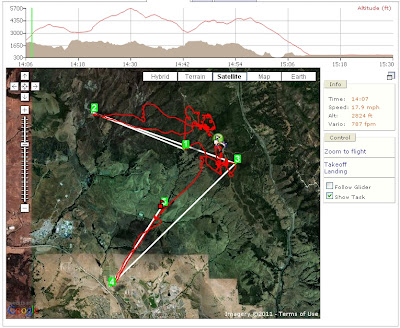 Today turned into a nice day for flying, and Dan, Dave M., Jeremy, Adam & I all got a good taste of the best of Winter Cuesta. . . 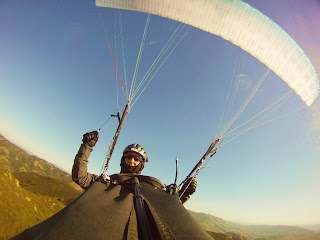 We got to the top around noon and were greeted by light Easterly puffs.  Birds were working weak lift in front, so we were encouraged.  Within 30 minutes the light East had filled in and all the birds, all the flies, everything disappeared for an hour.  We ate & told stories until things got still and the birds reappeared.  Around 2pm it finally looked better, so Adam & I got suited up. He grabbed his hang glider since he could do a no-wind launch easier than the rest of us.  He launched well and sank out immediately to 200' below launch.  Soon he contacted a good, if rough,  thermal and climbed to 4000'. 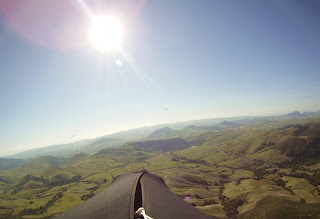 Meanwhile, I was standing in the chute ready to go and waited at least 15 minutes for a puff.  Finally I got a very light puff, allowing me to get in the air and immediately climbed to 4500 and that was it.  The conditions on launch improved and all got off well.  It was quite cold at altitude but the lift was abundant and smooth above about 2500'.  It was possible to move around quite a bit and I followed a weak lift line Northwest at a bit of an angle to the ridge for a couple miles before falling off the bubble and heading back to home turf again.  When I headed out to the LZ it was quite lifty so I flew all the way to Hwy 1 and still had enough altitude to head back to the LZ.  I thought about landing at Dave's (I had 1600' over the Hwy) but he's out of town and it just wouldn't have been the same without a ginger beer to celebrate. . . 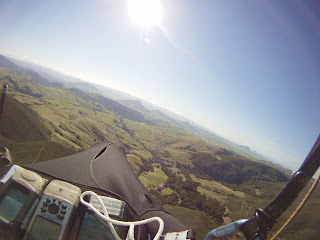 Top of climb for Adam & me was around 5300' and it was good to see the models proven correct. . . It wasn't looking too good there for a while & I was worried that I'd cried wolf too early in the season ;-)  Congrats to Dave M on popping his Cuesta cherry and the guys on sticking with me for 2 hours for the payout.
My Flight track is HERE.  I've got some cool video of the fun, but haven't figured out an adequate way to edit it without losing most of the quality.  Today I'll take stills and have some pics.
Tim
Posted by Tim at Thursday, February 03, 2011
Email ThisBlogThis!Share to TwitterShare to FacebookShare to Pinterest
Labels: 2011 U.S. Paragliding competition schedule, Cuesta Ridge

Nice blog you have here. http://www.letsgoparaglide.co.za