Jack G., Dave S. & I headed to Bishop to fly in the Owens Valley with the BAPA XC league. We had high hope for good weather & long flights. On the Friday eve drive North on 395 we saw the weather at left over the southern White Mountains (the East side of the Owens valley.) (click on pic) We saw some beautiful cloud build-ups & the Sierras were dusted that night with snow.

This proved to be the last of the weather though. Saturday dawned clear & beautiful. Unfortunately the winds were higher on Sat. than was prudent to fly, so we all had a recreational day in/around Bishop. Sat. night we all met at a pizza parlor to tell stories & celebrate Kari Castle's birthday.

Sunday looked good on paper, but had a very stable lapse rate, so lift was forcast to be weak & tops of lift - low. A task was called which ran us upvalley to Casbah & then South to Pupfish & across the valley to Keogh.

The leg North was straight-forward but lift petered out below 9000'. The field of 45 was littered all along the course. It was not a day to race - it was one of survival. I was able to hang with Jug & Rob S., thermaling towards Casbah. The guys decided to head out in the valley & tag the point & come back . I decided to hang back & work the last of the weak thermal. After gaining another 400' I too headed for Casbah. A mile from the turnpoint I found a great little core which bought me another 800'. I then tagged the turnpoint & returned to the foothills and entered the thermal the boys had found - this time I was on the top of the stack. This allowed me to work up high enough to make it down range & limp a mile of so farther than the field. Jug & maybe Josh C. were the only guys who made it further South than I. I put down in scrub near Susan who was headed to the waypoint. The scrub consisted of what seemed like barbed-wire tumbleweeds & it took 15 minutes to clear & fold the wing and another 50 minutes to cover the three mile hike to Hwy 6.
Miles covered: 15
Flight time: 1:40 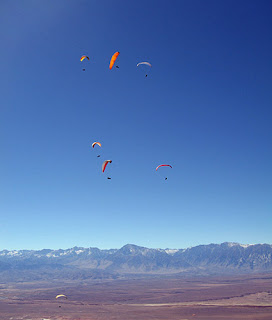 Monday the forecast was for SE winds in the valley, & light winds aloft. Jug knew everyone was heading out on long drives at the end of the day, so a 25 mile task was called - Just a downwind dash N. to Benton (about 5 miles from the CA-NV border.)

A few pilots launched 30 minutes before the start & flushed to the LZ in spite of some gallant struggles. A couple of good pilots hung in there & eventually I launched about 5 minutes after the Start Cylinder opened. There was speculation on the hill, earlier, that it may be the kind of day where you may be lucky to exceed minimum distance (5 miles) but after launch I climbed well to 8300' & Dave was ahead of me with good altitude. It looked like the day was improving.
Since climbs were low, I headed out lower than I wanted to. 15 minutes later I was only 600' off the deck & looking at another long hike to the road. . . I needed some lift NOW. With only 4 minutes to landing left, I felt a burble that foretold a core nearby. Soon I was happily climbing back into the game. I hate getting low when competing - it just slows you down drastically - but a save from low altitude is quite rewarding & set the tone for the next 18 miles.

I soon found myself flying with Bill Belcourt & Montana (both of whom made goal, dangit). We climbed in a couple of serpentine thermals to around 8000' but they wanted to push deep into the high ground. I knew the potential for high climbs was greater over the high ground, but I was sporting a serious blister from yesterday & didn't want to hike more than a couple of miles. They were also on higher performance wings, so I played it safe & stayed over the fingers. 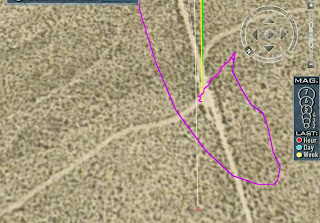 This worked for awhile, but eventually I needed to point at the goal, use the tailwind, & head into the flats. I was able to find a couple of small thermals in the valley but not enough to make goal. I eventually landed 3/4 of a mile from Hwy 6 and 6 miles short of goal. This time I found a nice spot with an intersection of two dirt roads that allowed me to land and lay the wing down, clear of any scrub. The landing went just as planned & the wing came down with nary a snag. Meanwhile Dave had his best day & landed a mere 1/4 mile from goal.

Altogether Dave & I drove 12 hours & each flew about 3.5 hours. . . This is within my personal 4:1 acceptable ratio of drive/fly. To be able to fly 2 out of 3 days in the Owens is great. Jack was very generous to offer us the use of his Tahoe to shuttle pilots up the hill. Dave was a great flying partner - able to candidly debrief with meaningful insights. The breadth of experience in this weekend's competitor list was unprecedented in BAPA comps. We had 5 US National Champs (including 3 of this year's US World's Team members) & many more top 20 pilots competing. What a great learning experience. Jug has done a great job of building this league to a regional status. His attention to detail & professionalism has made us all better pilots.