Monday we finally got some post frontal fun. The system, that passed through yesterday, left behind quite a bit of snow on the Sierras and even closed the passes for 24 hours. The remaining airmass was unstable, dry, and extremely cold. Winds were forecast to be light from the West.

We all met at the TownHouse Motel and then shuttled up the 45 min. 4X4 road to the Paiute launch. 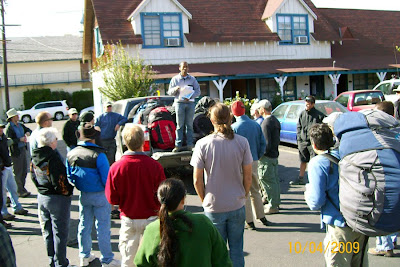 The task called was from Paiute launch to TowerControl (10 miles S.) then back to the North 35 miles to Benton, which is well into the flats.

I launched early and climbed to 10,500'. I had a good start and proceeded South for the first leg. The air certainly was more active and sharp than previous days and I decided early that I didn't want to put myself close to the terrain with such strong, sharp edges. I started the task taking climbs that I probably could have passed up, but felt that conservative was the way to start things off.

I made good time down to the first waypoint and managed to get out to the turnpoint and back in good shape. I then hit a massive thermal that gave me a fight for three or four turns. It had some 800+ft./min. air, but also spent time slapping me silly. It was all I could do to find some semblance of a core while fighting to keep the wing open. Eventually I managed to get some consistent lift, and was soon back above 10,500' and heading North.

Eric was ahead of me and deeper into the terrain, but I seemed to be making good progress by staying in the lower terrain. I had a slight tailwind so I was happy with the lower line. The lift was very dependable and sometimes very strong. They were the kind of thermals that grabbed the wing and just forced it upwards. It was quite a workout by the end of this 3:30 flight.

I made good decisions for most of the flight and was flying relatively fast. It was my first competition task on the Boom 5 and it felt good, even when the air got rowdy.

The last decision I made (relative to the task) was my undoing. I got a little impatient, or excited, and made the decision head directly from the mountains to Benton on a heading of 300*. I should have continued up the range, another 4 miles or so, before pointing at goal. This would have had me spending less time trying to penetrate upwind along course line. . . As it turned out I landed 1.5 miles short of goal. Eric, Arnie, and a couple others made it to goal by making a better final glide decision. 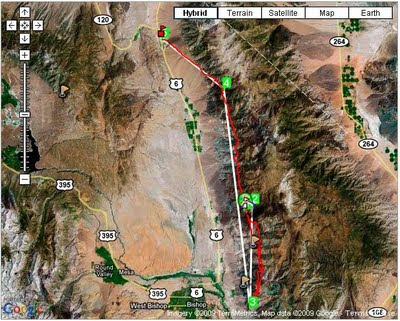 It was great to get today's task in before driving home. I flew 4 days out of 5 and learned a lot about the Boom 5. I really enjoy flying it and am getting more comfortable on it.

It was also great to see the commitment everyone made to fly this week. Everybody had fun and flew well. There were no accidents and all were very generous with their time & vehicles. It was good to have the time to meet and learn more about people I'd flow with but not gotten to know. Thanks to Jug for another great season with the BAPA league.

My flight is HERE.
League scores are HERE.