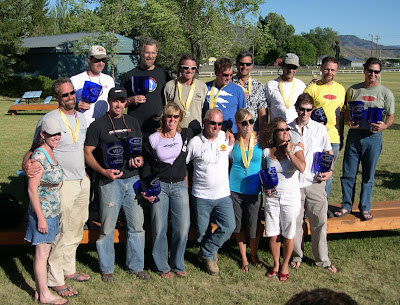 The awards Ceremony - (That's me at far right)
Dave & I got home this evening after a 10 hour drive. It's nice to be in my own bed.

The last two weeks were very rewarding. The Rat Race was a lot of fun with flying 8 days straight. The Nat's had too much wind, and the flying was very challenging. I had two days at the Nat's where I chose not to fly in the conditions at launch and was fortunate that both day's tasks were called off. I never put myself in a position I didn't want to be, no risky landings and no botched launches.

HERE ARE THE STATS:
I learned a lot of lessons that I'm still digesting & pondering - In 14 days I flew 202 miles - Total flight time 24 hours. I made goal at the Rat Race 3 times in the comp & once to declared goal in practice. Landed out 5 times without incident. Relaunched '0' times. I ate 10 Power Bars, 5 Crunchy Energy Bars, and 30 pints of water on the hill. I only had to hike once - 2 miles. Won two trophies and scored 5 T-shirts. Met a LOT of cool people & successfully met my declared goal by having more fun than anybody else at the comps!

Timo
Posted by Tim at Monday, July 02, 2007
Email ThisBlogThis!Share to TwitterShare to FacebookShare to Pinterest
Labels: 2007 US Paragliding Nationals, Winners