The day started with a pilot meeting at 9AM where we firmed up some of the technical issues such as min. distance, nominal dist. and time, criteria for scoring stopped tasks, etc. The WCPC is a small field this year with only a few more than 40 pilots, but the field is filled with good pilots.

When we arrived at launch the skies were overcast with high cirrostratus that blocked much of the heating. The South skies were still dotted with very unstable looking Cu's that showed there was potential for the day, once the sun was allowed to heat the surface. 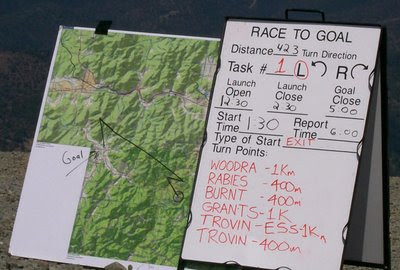 A 42km task was called from Woodrat Pk to Rabies to Burnt to Grant's Pk to Trovin (9k S of Grant's Pk). I launched early and got up high, only to get flushed about 10 minutes before the start time. I was able to salvage the start, if a bit late, and made the glide across to Rabies. I could see that the leaders were not doing well at Rabies, and many pilots were diving back into the valley, so I went into a very conservative mode and took a weak climb over the middle of the valley that gave me another 600' to play with when I got to Rabies Ridge.

The ridge was classic Rat. The air was very trashy and unpredictable. There were areas of bullet-like lift and convergences that made or broke your day. I was able to hang in the unorganized lift long enough to team up with Paul and Steve. We found a core and climbed, quickly to 6000' which gave us the ability to head over to Burnt Ridge. I'd estimate that at least half the field fell out in the first 10km of this task - it's amazing how difficult the 4-5km transitions to-and-back-to-Rabies were, do to the low climbs and wicked sink. 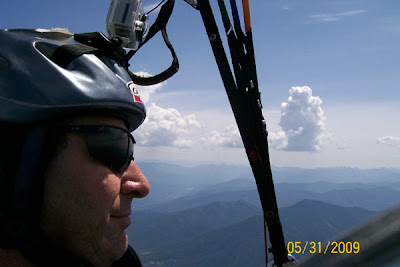 Once up at Rabies again, I headed North-West to Grant's Pass. The distance ticked down and the winds were very light at altitude. Abeam goal (about 7km. from Grant's) I was able to get a slow climb that appeared to put me in good stead - UNTIL I hit the wall. A wall of wind from the West became an insurmountable barrier to further progress towards Grant's. Every Serial-class wing ended up here and the wall was even unsurmountable for any comp gliders that came along after us. We were done.

Results are now out and Farmer won the day with Matt Dadam, Nate Scales, Josh Cohn, and Nick Greece next. I place 4th in the Serial Class and 15th overall. Happy to make it that far.

All-in-all the task was well suited for the day. It was tough on the 1/2 & DHV 2 wings during the first part of the task and that's the nature of this valley.
Results will be HERE as soon as they are available. My flight is located HERE.

After I got back to my room the skies opened up - here's a bit of a taste of the tropical conditions this evening.

The next couple of days look less conducive to long tasks, but the Rat can be a trickster.

It's great that you are taking the time to fill in the blanks for all of us that couldn't make it the meet. You're doing a great job, keep it comin' Tim-O.

Thanks Deano - Wish you were here.
Tim

Tim,
Thank you for the details! Wish I was there to pick you up with a cold beer in hand!
Cheers, have fun and keep writing!