The task today was another great task. I think this may have been the most 'FUN' task that I've ever flown here - and that's after flying many comps and making goal - which I didn't do today.

Only one pilot (Matt (Farmer) Beechinor) made goal, but there were many of us that were within 6k of goal when the East valley winds kicked in and the sun was blocked by an intimidating super-cell to the South West. But I'm getting ahead of myself - 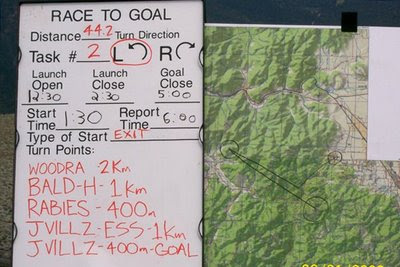 The day looked bleak from the moment we got to launch. Clouds at many altitudes were visible. There were scuddy clouds below hilltop level and some imposing buildups to the North. Here's a view from launch around 11AM.The task committee called a 42.5 Km task from Woodrat Pk (2K exit cylinder)- 20K to Bald Hill, - back to Rabies, then 9K to Jacksonville LZ. The day looked like it would be weak until it went off (assuming surface warming) and then just a matter of 'when' the clouds would OD.

I launched early again and soon was working with the gaggles to get and stay high. We were only able to get a bit above 5000' so the transition to Rabies (on the way to Bald Hill) would be another sketchy glide. Although starting a few minutes late yesterday worked in my favor, I found myself in a good position and high enough to head across 10 seconds after the start time. The reception at Rabies was about as 'homey' as yesterday. A few got nothin' and ended in the LZ after making valiant efforts to get up. In my case, I was down to 300-400 feet above the LZ when I dug into a thermal that took Andy, Brett, Paul and me back into the race. We got high enough to get into Rabies again and found some good lift that got us on course - a full 35 minutes after the start. 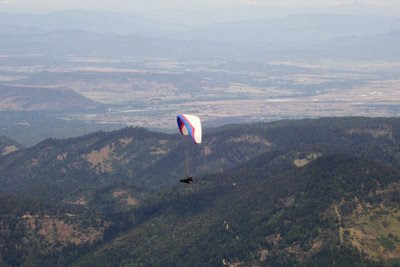 We headed on course with an impressive view ahead. The photo below is of Josh, as we followed him on course. 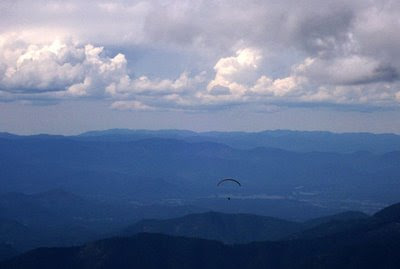 We didn't see any weather that was sinister looking until the last leg of the task. As we approached Rabies, prior to the turn East to Jacksonville, the development to the South was very scary looking. Because the course took us East, and because the weather wasn't moving rapidly, it allowed many to scoot along courseline to goal. The problem was the low-altitude winds had picked up and thwarted all but Farmer on the glide to goal.

I had my very own, personal roadblock - my brain quit working while on the way to goal. I had a field on my instrument programmed to give me (I thought) the glide ratio to goal required. . . I didn't do the math to check the indication so when I was approaching Rabies, the last turnpoint before the short leg to goal, I realized that I was too low to make goal and had to find a climb before going into the tiny valley between Ruch and Jacksonville. To make a long story short - I decided to end my flight with Tom in the Bishop LZ 10 minutes before the task was stopped due to the approaching weather. 30 minutes later we felt the gust front roll through the area with 20-30 kt gusts.

As I wrote earlier, only Matt Beechinor made goal with at least 12 others within 6Km of goal. Tom and I are probably in 12th-15th for the day.

This task was a lot of fun because it started with a very low save that took me from resigned defeat to running with the leaders for the next 30Km. I doubt that I'd have been able to make goal even if I hadn't brain-farted, but I would have been in the J-ville area rather than on the Ruch side of the hills.

I'm in 11th overall and 4th in the Serial class.
My flight is HERE.
The weather for the next few days looks doubtful . . . I hope we get to do more flying.