But it's not easy. I mean, I AM having fun most of the time. But I'm a competitive guy, and I'd like to stand on the podium as much as the next guy. It's not that I want to get a trophy (although it's nice, before paragliding, the last I got was when I was 12). And I don't need to win so I can swagger amongst the launch queue. But I want to do my very best at the sport that has my attention.

In order to plot my progress I've built a crude Excel graph of my placing in the last eight competitions. No compensation has been made for field quality or for the fact that I was on a DHV 1/2 and 2 for most of these comps. 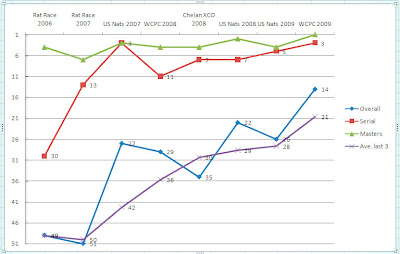 My present wing, a Gradient Avax XC2, is an EN-C (almost a 2/3) that I am very comfortable flying. I don't have any qualms flying it in angry conditions because I know what it is saying and how it will react. I also own a Boomerang 5 that I have flown a few times now. The Boom 5 has obviously better performance but isn't a wing that I enjoy flying - right now. The handling seems unresponsive and almost untrustworthy. I imagine that I will get some confidence on the Boom, with time, but until then I will be competing on the Avax XC2 - that includes the U.S. Nat's in Inspo UT in August.

So - looking at the graph, it seems there has been some progress. I'm happy competing and learning while flying in the Serial/Sports class. I'm also getting a taste of the Boom on days that allow some altitude.

Its not a valid comparison, because # of pilots was different in all comps. Divide each number on total number in category to normalize your results.

Hey Alex - I agree. I called it 'crude' because of the factors you mention. I'd rather fly than fight with Excel and results sheets for 8 comps ;-) Besides, the same top 30-40 pilots make most comps, so its validity is fine for my 'trend' usage.