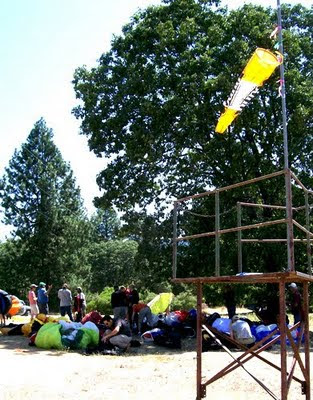 This weekend Jack Grisanti joined me to fly in a weekend comp at Dunlap, CA. We drove up Friday night and stayed in my Pop-Up camper. The days were about 85*-90* in the Valley but cooled in the evening for perfect sleeping weather at the top of the hill.

The turnout was good with many first-timers and a few visitors from Hawaii, Germany, and Bo from Seoul.

The weekend forecast looked like the top of climb would be around 6000' with good climb rates and no cloud. Actual conditions were good with some very small cores that made centering a bit of a struggle.

The 65K task on Saturday was lap of the Dunlap valley followed by a 37K leg to goal at Woodlake. I had a good start and was in the hunt for the first few waypoints. At Bald Mtn., the last fix before the leg to Woodlake, I was about 10-15 minutes behind Josh & Eric and Kansas. I was between the lead pack and the second small gaggle. I hit the Squaw Valley turnpoint and decided to go back to Bald for a climb which would also (possibly) allow me to be joined by Steve and Alex to help with the nleg to Woodlake. By now the West winds had established and it seemed to break up the lift on top of Bald. To make a long story short, I ended my flight at the Ranger Station with many others after getting skunked at Bald. I had made what I thought was the high percentage decision. The fact that it didn't work out doesn't it make it wrong, but it does make me replay the decision to look for reasonable alternatives.

Eric was the only pilot in goal, with Josh and Alex just short of goal. I placed 5th or 6th for the day.

Sunday weather was a carbon copy of Sat. and we called a 39K task that included 5 valley crossings. With the winds, and critical crossings, this task was very technical. Every pilot had at least one or two low saves.

I had another good start and was, again, right behind Josh & Eric for the first hour, with Kansas, Alex, and Steve, just ahead of me or hot on my heels. We (the second gaggle) actually traded positions many times as each of us found our own holes, routes, and low saves. I was very conservative generally, and used most climbs until the net gain (lift vs. drift) was a wash. 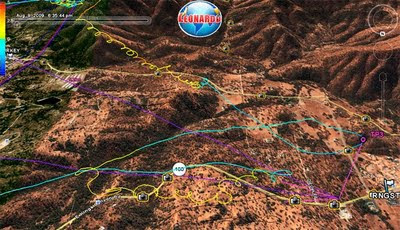 Near the end of the task, as I neared the ranger station I passed by Kansas and Josh, who were in the lead and flying from the Ranger station to launch. They were quite low and flying along my track. I had felt little in the way of lift, so I was in doubt about the prospect of lift along that route. As I headed the last 2K to Ranger station, I kept an eye on Josh & Kansas and it was not good, so I made the turnpoint and turned left to a low (200' tall) lift trigger. The hill had been terraced for a home and had a field at the base if no lift was found. Fortunately, I hit a well behaved thermal at about 250' above the ground that took me up 3000' and assured making it to launch. I'd have to say that my decision to take the weak climb, just prior to the ranger station, which gave me the extra 200-300' to get to my lift trigger, was THE decision that allowed me to make it to goal. Luck was a factor too, but in this instance, I made my luck.

On the way to launch I found one more boomer that gave me enough altitude to fly from launch to Granny's knob, then to goal. Alex had had a similar save and was only about 5-10 minutes behind me into goal. There were no other pilots at the goal field, so my initial thoughts were that Josh and Eric had gone looking for shade and beer. It wasn't until a guy drove by and congratulated me that I realized I was first into goal 8-) Alex was also surprised when he found out that we were the first. SEE EDIT BELOW. 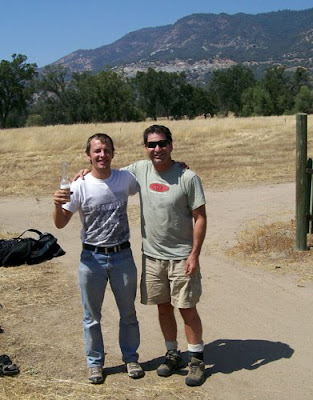 We had a celebratory brew and packed up before a few other pilots landed at the LZ, but I'm unsure if they completed the task. It was a long day that required the dreaded low save. I was able to make goal while others weren't, only because I was lucky enough to get my save when I needed it most. Alex flew very consistently well - placing second on both days.

It was a great weekend with a lot of great flights and great people.

EDIT - My initial thoughts were correct! Eric Reed won the task day with a great time of 1:20 for the task. I was a full 38 minutes behind Eric. He then continued on to a landing out by the pizza place. Alex and I are happy with second and third.

Results will be HERE soon.

My Sat. Flight is HERE.

My Sun. Flight is HERE.

This was a fun weekend and a good warmup for the US Nat's next week.