The weather has been cooperating here in Utah and we had a stellar day today. Climbs were 'exuberant' at times with fierce jolts of 1500'/min up, but generally the task was well suited for the day. We had 25 or so in goal - many of whom were very late on the course but were able to fly the route well using convergence and taking advantage of the lessening headwinds. 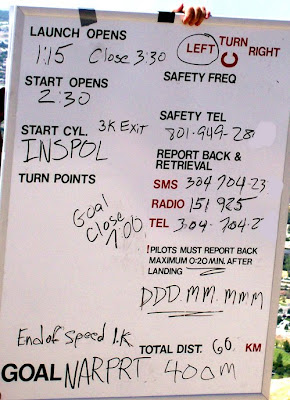 The forecast was for North West winds so a 66K downwind task was called to Nephi airport.. This sounds easy, but it was hardly downwind. In fact, if you took your climbs high enough, you could be looking at a 25K/hr headwind. There were also some expanses across wide mountain canyon mouths that were challenging.

The day started late and the task cmty pushed the start time back because none of the (2) wind techs were able to stay up. Finally a few launched and it was on. I was able to get high and back towards Cascade Peak which put me in good position for a nice, high, well positioned start.

After the start we headed along the range with one gaggle going back to the higher range and getting 1000-2000' higher than those of us out front. When we got to the end of the range, and we were given the choice of going out over the flats or going left and following the range on the South side of the gap. 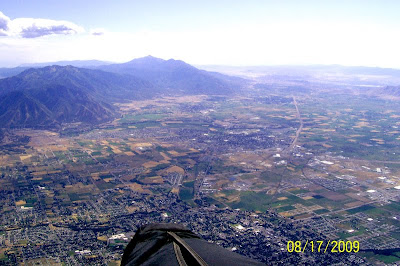 Many ahead of me were going on (what looked like) death glides into the shadowed flats, while some were hanging in weak lift as they traversed the range. I was high enough to get a very good view of things and had started to turn to the hills on my left when I noticed Jug also heading that way ahead of me. We were able to contact some very nice lift as we flew along the range and worked our way South towards Spanish Fork.

Later in the flight another choice of High ground vs. across the flats presented itself. I chose the latter and made it to some very promising bumps that should have been pinging off thermals like mad. I spent the next 20 minutes bouncing along 50-150' off the ridge trying to get up. I ended my flight when a reasonable field presented itself without any others beyond that point that I liked. I was met by Karen soon after landing and we scooped up 7 more pilots before returning to HQ.

Meanwhile many pilots who had been behind us were high & going to goal. They flew a better line at a better time, and enjoyed making goal.

Mads Syndergaard won with a margin of 20 minutes and has taken 1st overall.

I placed 34th for the day which puts me in 40th overall & 3rd in the Sports Class.

Scores will be HERE Below are the overall standings for the top 10:

My flight is HERE

The next few days look very similar to today, so I hope to get to goal tomorrow and thereafter.

We did have one pilot get injured yesterday while making a tricky landing. He broke his leg and is in the hospital, but is in good spirits and we all wish him well,

Nice work out there Tim and great photos of each day even if it is just one or two. I can't believe how close the lead gaggle times were, after Mads of course.