The weather improved today and it was a fun day of flying.  Classic Woodrat convergence and occasional snotty air, but the afternoon valley winds that everyone was waiting for, never materialized. 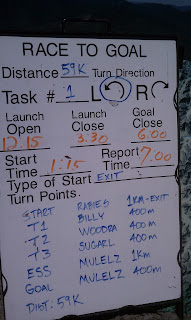 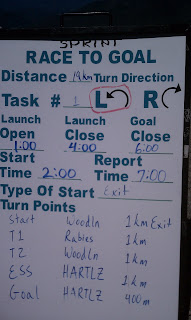 This year the Rat Race has two races running concurrently - The SPRINT race and the RAT RACE.  The SPRINT task was 19K and the Rat Race was 59K.  I am flying the longer tasks.   The start cylinder was across the valley and an early start was important.  The launch cue was very slow for quite a while and I got a late launch and paid for it with a start at least 10-15 minutes behind the lead gaggle.  No worries - Lots of company.  The first 30km of the flight went well and I was able to make up a bit of time without getting myself into a hole or too alone.  The lift was dependable and strong with the occasional slapping around in the convergence.

After crossing back from Woodrat Mtn. to Rabies for the last push into Sugarloaf Mtn. I was hoping that I was early enough to avoid the strong North or West that had a chance of developing.  No strong winds were encountered, but there were some seriously sinking areas the went of for an eternity.  Sink of 2000 to 2400'/min. were not uncommon and put me in the position of not wanting to push bar because the wing was fluttering in the trash, but needing to push it just to escape the sink.

I came across the valley on a direct line to goal 12 miles away, and I had some company.  We all had plans that varied enough that we got a good sampling of the air, but unfortunately none of us were finding lift.  On the West side of the valley I found some minor lift while surfing closer to the trees that I like and ended in the flats at the mouth of the final valley to goal.   I joined Hayden and we worked slowly towards goal - he with about 400' more to work with.  I eventually needed to cross one finger while I had the altitude to make it and Hayden was able to contact a nice climb, behind me, just after I left him.  He made it to goal.  I made it to goal, but it was the SPRINT race goal - 5 miles short of my intended destination.  At least there was beer at my LZ ;-)

I placed 22nd overall and 9th in Serial class.  Not a great start but I'm having fun.  Monday looks good, so we can expect another good one.  Results are online at http://flyxc.org/2011RatRace.html - here's the top 5:
More later -
Tim
Posted by Tim at Monday, June 20, 2011
Email ThisBlogThis!Share to TwitterShare to FacebookShare to Pinterest