I launched as soon as the window opened and had an easy climb over Woodrat Peak and made the early transition to Burnt to scope out the lift in the area of the start cylinder.   Soon the air got crowded over Burnt as we mapped out the convergence for the start.  About 10 minutes before the start I blundered away from the rather fragmented gaggles just long enough to find a massive sinkhole and put myself in a low position during an obvious down cycle.  Many good pilots were struggling to stay in the air.  I found myself a bubble at about 200' below mid launch and worked it patiently until it bloomed into a 450'/min. elevator back into the start gaggle.  I was very fortunate to make a reasonably decent start into Rabies for the leg to Prospect Peak.  The thermals were good sized and strong as we proceeded North.   I had vowed to get to goal today so my progress was deliberate and I remained high for the most part.  For those who were high the lifty lines were easy to see while watching the pilots ahead and below.

The high cirrus clouds that had been approaching from the North West shaded the Prospect Peak area as I approached so it was very important to take a good climb before heading out to tag the cylinder and allow for the return to the ridge.  At this point I joined Jug and Szilard and we worked together.  Soon small areas of sun appeared on the terrain and we found booming climbs that made the return leg to Rabies fairly quick.

The leg from Burnt to John's Pk. was a slow tip-toe until we found a nice climb with a helpful hawk that calmly showed us the best core.  I headed into the turnpoint at John's and returned the 3km. to find the same climb.  When I got to the area of the climb the same hawk was still orbiting to show us the climb.

After that climb I rolled out with a 6:1 glide to goal and saw Jug and Szilard below and slightly ahead so I pushed full bar and chose a very lifty line to get to goal.  Every core I flew through gave me a lift, even while holding full bar, and I was getting around 10:1 glide.  I had such a lifty line that I was at least 2000' too high at the end of speed section.  I placed 15th (tied with Szilard because he beat me by 8 seconds, but I had more leading points) and this was my best showing of the week.

The day was won by Nate Scales, followed closely by Josh Cohn, Matt Beechinor, Matt Senior and Nick Greece.
The Rat Race had 26 in goal and the Sprint race had 42 in goal today - Many happy pilots at the Longsword Winery!

Rat Race Scores can be found at http://flyxc.org/2011RatRace.html

Sprint Scores can be found at http://flyxc.org/2011RatRaceSprint.html


I just got in, after a 10 hour drive so that's it for now.  Here's a great video of the Rat Race this year.

Below is a photo of the festivities at RRHQ just prior to the awards ceremony. 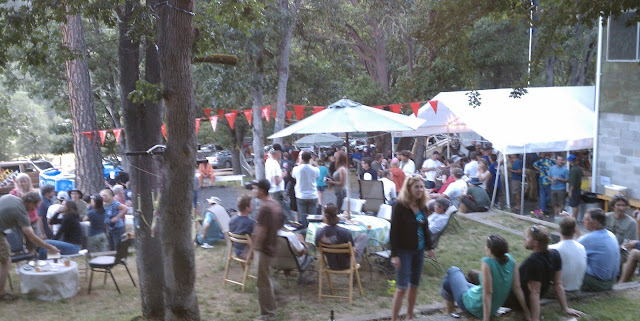 Posted by Tim at Sunday, June 26, 2011
Email ThisBlogThis!Share to TwitterShare to FacebookShare to Pinterest