Task Two at the PG World Championships was a 77Km task to Avila.  Conditions were forecast to be a bit lower top-of-lift than yesterday.   This will come as a relief to those pilots who were buoyed over the 10000' ceiling during yesterday's task and received a "0" score for their efforts.

Here are two graphics showing the airspace issues that the task setters and pilots are working around. 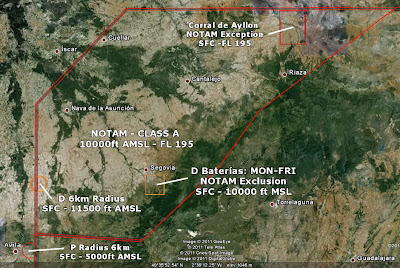 The LIVE LEADER BOARD shows the provisional ranking as scoring is tabulated.  Scores for Task 2 will be posted at http://www.piedrahita2011.com/piedrahita2011/taskReports. . .

At this moment (1400 PDT) the Competition website has been taken down.  A request to the PG Forum was made to lock the world championship thread.  This was done (and has since been relaxed) due to the extremely unfortunate occurrence of two separate accidents (separated by 70K and 2 hours) that resulted in the death of pilots from Argentina and Chile.  In a release put out by the Piedrahita Staff they wrote:

It is with great regret that the organisers have to announce that there were
two serious accidents during the competition task today. The first accident
occurred at approximately 14.00. Argentinian pilot, Francisco Vargas
crashed into the hillside a few kilometres from launch. Emergency services
were called to the site, but the pilot died at the scene.

The second accident occurred at approximately 16.00 in the Avila area.
Chilean pilot Eitel von Muhlenbrock lost control of his paraglider and crashed.
Emergency Services arrived swiftly, but the pilot died from his injuries.

Next of kin of both pilots have been informed.

We do not yet know the cause of either of the accidents, but an investigation
to determine the sequence of events is already underway by the event
organisers, together with Safety representatives of the FAI and the local
police. As soon as we have further information, we will issue another
statement.

There were three further minor incidents today, involving the deployment of
reserve parachutes. All three pilots landed safely and were uninjured.

The organisers wish to extend their deepest sympathies to the families and
friends of both Francisco Vargas and Eitel von Muhlenbrock.

My heart goes out to those who are left behind by these great pilots. Tomorrow will surely be a day of mourning on the hill in Piedrahita.

Rumor has it that there may have been many more than the "three" reserves thrown in what the Piedrahita note called "minor incidents" today. This will undoubtedly rekindle the simmering debate about 2-liner wings that are rock-solid until they stop flying, but become unrecoverable. This necessitates the use of the reserve which is a "last-chance" option. If the rumored number of reserves were actually used during today's task, it would indicate that we had about a 5-7% usage of this last chance option, on this day alone. No details about the accidents/incidents today are available, and it would be irresponsible to speculate on the causes at this time.

Provisional results indicate Josh Cohn was the top US pilot at 13th, and Jack Brown was next at 41st. Brad was 58th. Melanie landed at 34K for 12th in the women's class.