"It's a funny thing. From the outside the X-Alps looks like a hiking and flying race. When you look closer, you realise that really it's a flying race. And when you look closer still, you realise that really, at the heart of it all, it's a mental game. The very concept of risk for someone who is capable of being a serious contender in the X-Alps is very different from anything any recreational, XC or competition pilot would normally understand from the word. This is only something I learned from competing in the race myself. Maurer, Hofer and Muller had the appropriate mentality before they started the race for the first time, I certainly didn't."

Tom Payne 2009 X-Alps Athlete
The 2011 X-Alps Adventure Race begins at 1PM on July 17th.  This race allows paragliding and hiking along 8 turnpoints between Salzburg, Austria and Monaco.  Total distance is 864 Kilometers but the 30 athletes will cover considerably more than that as they navigate among the peaks and valleys of the Alps.   This is the 5th X-Alps and only two 2011 athletes have competed in all 4 of the preceding races - Andy Frötscher(ITA) and Toma Coconea (ROM) 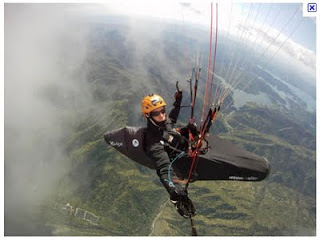 The 2009 Top Three Athletes were Christian Maurer, Alex Hofer, and Honza Rejmanek from the U.S. Alex Hofer placed 2nd in 2009 and first in 2005 and 2007. Unfortunately he had a crash last month and is out of the race this year. Christian Maurer won the race in his first attempt and has been training hard to defend his title in this year's race. USA's Honza Rejmanek, and his assistant Dave Hanning, will be in their third X-Alps, placing 9th in 2007 and 3rd in 2009. He had extreme food poisoning in 2007 and still persevered to cover a lot of ground as he recovered. In 2009 he had some knee issues that slowed him a bit and required him to descend mountain roads walking backwards.  Honza is one to watch this year.

The rules include some new features.   A new mandatory rest period will be imposed every night between 23:00 and 0400.  This has potential to keep the racers a bit closer together.  Last race there were many short nights as the leaders tried to get away from their closest rivals.

This race is an amazing combination of flying skill, physical stamina, and mental toughness.   In addition,  a good assistant and a good strategy is important to success.