Aftermath of a fall - This one turned out well.

None of us wants to leave a three-day flying weekend knowing that we are leaving one of our own injured and alone in the mountains. We all want, even less, to be that guy.

This weekend, at the Nor-Cal XC league event; three days of flying geared towards new and improving XC pilots, one of our experienced pilots found himself down in the White mountains at around 2:30 pm and spent 12 hours lying injured on the hill, awaiting rescue.

I've heard words of surprise from some of my fellow pilots, that it took so long to get him to the hospital, but I was actually VERY IMPRESSED that the efforts of many culminated in the successful resolution of this event.
Let's work through the timeline of the event -
This is the point where I got involved; Just back from goal, with no idea what's up– around 16:10. 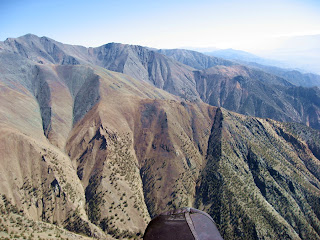 This situation, if things hadn't gone well, could have easily been a body extraction, folks.

You simply can't find someone in a mountain range, this big, without some hints.

Even though PilotX's injuries weren't life threatening, he was incapable of hiking out and had no survival gear with which to buy time to allow for rescue

The guys hiking into the site would have arrived sooner if they'd had the ability to see his position with a strobe light or headlamp. A SPOT would have been a valuable aid to pinpoint PilotX's last known position and to get rescue started in a timely manner. (I'll just go on record now – if I go missing, use my SPOT page on my blog & you'll see where I'm laid out.)


Yup, we got very lucky on this one.  Please carry some gear.  I carry a spare radio battery. I carry a AA power source for my cell-phone,  I carry a strobe light and a headlamp.  I carry enough clothing that I could spend the night on the hill.  A SPOT is cheap insurance.  If the crap slaps the fan, at least put the odds on your side that you'll live long enough to get rescued.


If you fly XC anywhere, even in the Dunlap valley, and you don't carry some survival stuff that is accessible while sitting injured, IN YOUR HARNESS,  then you are the intelligence equivalent of the idiot that hikes into the Grand Canyon in flip-flops, carrying a diet pepsi. Please don't be that guy.

It's not like I haven't preached about this before – My article about survival strategies and a DIY survival kit was in the USHPA mag a while back.  It's available at http://biggovtsucks.blogspot.com/p/articles-by-tim.html. EDIT: I've had some input from the NAS Fallon helo crew, and they recommend carrying Lite Sticks (red is best) in our survival kits.


The 2010 XC season is almost over for us in the Northern Hemisphere, so take some time and make a survival kit. I hope you'll never need to use it.  But if I'm coordinating your rescue, I'll rest easier knowing that you have a light source, water, warmth, and can communicate. I'd also like to send a word of Thanks to the Mono County Sheriff's Dept. and their volunteer team of SAR team members who gave up a nice warm bed to help one of our guys. Fly Safe, Tim
Posted by Tim at Wednesday, September 29, 2010
Email ThisBlogThis!Share to TwitterShare to FacebookShare to Pinterest
Labels: accident, avoiding accident, favorite, Owens valley paragliding Bishop XC, paragliding accident, personal tracker, rescue, risks, SAR, SPOT, survival kit, XC tips

Good stuff Timo. I'm already preaching to my students about safety gear and not only that but keeping it someplace you can reach it if you are stuck in a tree. I always carry a pocket saw, clippers, cordlette, headlight and 50' of dental floss (can lower it down to pull up a line that can be then used for more gear). I've yet to use this stuff for myself but have used it multiple times for others already. One other thing people need to consider is to have a small day pack that you can pack water/food in if you have to hike out and leave your wing (a good flight deck will usually do the trick if you fly with one).

This report implies the value of safety for uninjured pilots in the event of a crash. Accessibility and capability are the operative words here.. What happens when the pilot is severely injured and the pilot can hardly move his legs or arms due to some heavy back and neck injuries? What if you couldn't reach your SPOT even if you had one? What happens then? Can you preach about that?

@Aaron - Thanks for the input. Good points.

@Anon - It is very important for us all to have certain items accessible to us without getting out of the harness. I've played around, while laying on the ground in my harness, and have my water, light source, meds, transceiver, batteries and cellphone, all accessible while in this position. My SPOT is on my left shoulder and can be activated with either hand. Thanks for the good point.
Tim

Timo, I am a member of the NAS Fallon SAR Team. We got the call at 22:30, launched at 23:25 and hauled butt down to the Bishop area. We spotted him around 00:30 and we saw the ground rescuers working their way down the mountain. At around 01:00 we had reduced our weight enough to land on a ridge nearby. Two of us worked their way down to him. He was waving his radio at us. We met up with two of the mountain rescuers, they helped get him ready and clear the area for pick up. After getting him ready for removal, we had to wait for our helicopter to reduce weight (burn gas) so it could hover over the spot. Being it was about 11000 ft and warm out made it dangerous for the helicopter to hover. We took a chance and was able to hover long enough to get him and one rescuer into the helicopter, leaving the second rescuer on the mountain. They delivered him to the Bishop airport. They then went back to pick up our second man. The sad part was we could not stay longer to get the two people who had just climbed down a mountain to get here. They had to climb back up, sorry guys.

Here are my recommendations to help get rescued:
1. The discreption of craft is a must. We were told a glider crashed, so we were looking for a "glider", wings, fuselage, tail, etc. After two passes we saw the chute on the mountain.
2. Carry Chemlites, red if you can find them. They are cheap, very visable from the air, and can be taped to just about anything.

Thanks for filling in the blanks about this rescue. Still confused why it took so long to get us involved.

Thanks for your involvement in the extraction and your info. I will do my part to get the word out about the chemlites.

It's my understanding that NAS Fallon didn't get the call initially because the plan was to use a careflight helo, but they ran out of light and were unable to respond under the existing conditions. Ironic that the warm temps were a liability for you while they were helpful in the case of the victim.
Fly Safe -

After reading this, I realized I don't necessarily carry the gear, water knife, light, etc where I can access them while in my harness. Good point.
Josh

Lots of pilots have a light source without realizing: the flash on your camera. Good for showing your position in dusk and night.

Another camera tip: take some photos of the local map, and you can use them on the cameras LCD. I often do this on trekking.

Thanks for the tips Geir. Good input.