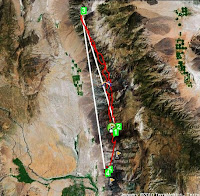 Today was an eventful day. . . and a lot of fun.  We had a great turnout for this weekend and the weather was classic high-pressure Owens.  The nice thing about a ridge of high pressure moving in, is that the winds are generally light.  The less than nice thing is that the thermals are rocket ships that just shoot through your wing with lots of enthusiasm. . .  If one isn't flying with the same enthusiasm as the bullets being launched upward, it can be an un-enjoyable day. 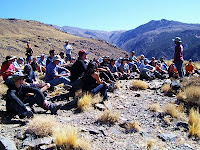 We met at the Motel in town at 9am and had a large parade up to the Paiute launch.  There were a lot of new faces so we did a site briefing and an extensive pilot meeting.

The task was from Paiute Launch North to Montgomery Creek (just short of Boundry Peak) the South to the Flynn LZ - 86Km or 53 miles.

I launched about 40 minutes before the 12:45 start and had a decent start.  Kansas, Jug, Fred and I were leading out for much of the first 20 mile leg to Montgomery Creek.  The winds were light, but definitely had a South component.  Just after tagging the turnpoint, I was heading into a nice bowl on about 1/2 speed-bar when the right line severed and I was suddenly without speed-bar for the 30 mile upwind leg to goal. . . 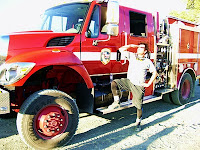 Things were going fine (in spite of my equipment problem) with Kansas a thermal ahead and Fred flying deep and downwind of course.  Jug and I were making good time and staying ahead of a gaggle of 4 or 5, behind us a mile or two.  We flew a good line with abundant lift and finally Jug and I got a climb, 7 miles from goal, that gave us a 5.2:1 glide to goal.  We rolled out & within 5 minutes I saw a wing ahead of me fold up and cascade to impact in the foothills ahead.  I thought it was Kansas and made a call.  It turned out to be Fred, and he sounded OK.  I landed near him about 10-15 minutes later and hiked up to his location with a group who had 4-wheeled as close as they could get, to help.  When we arrived, Fred had packed his wing and was just about ready to hike to the ambulance that had arrived.  It was a welcome surprise to find Fred walking and talking after watching him pound in.  We were met by a Cal-Fire crew and Fred posed for a recruiting ad.