A group of us decided to do some "value-added" flying today.  Conditions have been suitable for launching from Walt's Point on the Eastern side of the Sierras all week.  This launch has been a popular launch since the 60's and allows for long flights to the North.
The launch can be tricky though.  Walt's is a cliff-launch - that is, you layout on level ground and then pull up-turn and walk off a cliff. . . It can be interesting.  Unfortunately, Walt's launch isn't suitable for a large group due to it's restricted size and requirement of high launch skills.

Flights from Walt's are spectacular because it provides views of the Eastern Sierra Range from perspectives that noone else can experience.  You can hear and smell - almost touch the most beautiful mountain range in California.

We didn't have a goal today.  Bishop would be nice, crossing to the White range would be cool, but we were just going flying.  A nice relaxing flight with friends.  Dean was flying high point - patiently relaying info to Heidi, who had graciously offered to drive for us.

I launched first and went directly to 13,500'.  I loitered around launch for 30 minutes to allow a gaggle to form so we could convoy up range together.  The views were so amazing that I won't even try to convey their beauty with words. Even my photos don't even begin to produce the vivid colors of the rock and the deep blue of the alpine lakes.

We all made it to Big Pine without struggle but some high Cirrus was washing out the sunlight so lift was getting shut down.  I was tired (not much sleep while monitoring the situation in the White mountains all night) a bit hypoxic, and generally beat.  I found a nice big field about 63 miles from launch and landed.
It was a great weekend with 13.5 hours flown and 185 miles flown.

Results will be HERE, when posted.  My flights are HERE. 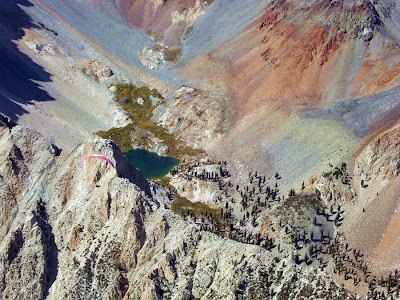