The troops met in Dunlap for the last time in 2010 this weekend.  The weather was reasonable with clear skies and light winds forecast.  I arrived at the top on Friday night and watched the sunset while assembling my pop-up trailer.  The sky was red and the sun a bright red due to smoke in the air.

Saturday morning we awoke to smoke clinging to the canyons and in the air.  Apparently a fire was burning in the Sierra between Dunlap and Bishop.  It was in the deep Sierra and wouldn't affect our flying tasks to the West, but was a good indication of the Easterly evening wind. 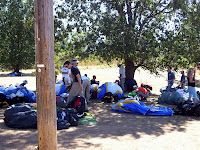 Saturday Jug built a task that had us do the valley tour, then head Southwest to Cutler, and back to meet at the pizza joint in Squaw Valley.   I launched early and found the lift to be dependable up to the 6,500' inversion.  I manged to get a great start and was first over to Hill 49917 and back to launch for the leg to Last Chance.  Fred went ahead of me on the way to Last Chance.  Josh and Jug took a higher line than I did on the way back to launch and we flew together for the remainder of the task.

It was obvious, as we proceeded from Hill 49917 to Bald Mtn., that the West wind was much stronger than expected.  The leg SW to Cutler was going to be tough even if we could get up at Bald (which we didn't).

Everyone except Fredric landed at (or prior to) the ranger station.  Fred continued on to land a few kilometers South of the pizza joint.

Sunday's forecast was similar to the preceding day's with light, Southy winds.  Jug built a great task of 24 miles that had two valley crossings and some good opportunities for tactical decisions.  As it turned out, the task was very enjoyable racing and put a lot of pilots into goal.

I had another good start and was chasing Josh around the course.  Another gaggle was trailing me by a climb or two and kept me hustling to stay ahead.  It was nice to find climbs when you needed them and, sometimes, nice climbs were found in spots that usually don't work too well.

My last climb was to 7,000' and gave me sufficient altitude to fly to Bald and then to the finish.

It was a very fun day of racing and great to see the happy faces in goal after one of my most enjoyable flights in Dunlap.

Cumulative scores for the league will be HERE when they are up.

Next week the league heads to the Owens Valley and it's looking less than likely I'll be able to attend.  I hope the weather cooperates and you all go high & far.