Imagine this: Your adventure today is to get dropped off somewhere, 20 miles away from home, and get back using your cunning, charms, and skill. . . or bribery – if necessary. This drop off point may be far from a main road; may even be in a pasture far from the farm house (which might be deserted). You won’t even know what the name of the road is, and cell service is doubtful. . . Sound like fun? That is how every cross country paraglider flight may turn out. Often, the real adventures are the events that occur after we land. Sometimes it is less than fun. Sometimes you see the best in people and really enjoy the process – it helps if you have good karma. That’s the way this weekend worked out for me. 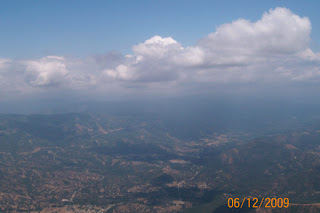 This weekend had some of the SoCal crew joining the BAPA XC league regulars in Dunlap. The weather was stellar; great cumulus cloud streets to indicate likely lift sources and very light West winds. The only overdevelopment was East, over the high Sierra, so it was not a factor - perfect weather for XC.

The flying was fun and ‘active’ due to some very strong edges to the thermal cores. I saw my wing do things that I hadn’t seen before – occasionally accordioning and bending midspan in ways that were just ‘wrong.’ I told myself that if I didn’t look up – all was well. The views of the wing aside, nothing scary or uncomfortable occurred and the flying was a lot of fun. That said – My flying basically sucked. My decision making still put me in holes that I had to climb out of and slowed me down. I also landed well short of goal both days.

Saturday’s task was a lap around the Dunlap valley, then out 180 to the pizza joint, then South to Woodlake. I made it into Squaw Valley and decided to fly along a cloud-street that bordered on a stretch of remote country. I did my best but had to land in a field at the South East end of Drum Valley. I actually had landed in this field a couple years ago and hiked about 5 miles before a retrieve driver picked me up. No such retrieve drivers were coming on this trip though. Here’s where the first bout of good karma kicked in: 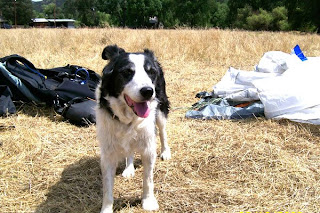 The ranch I landed at is a full eleven miles from the main road. There was one person within 11 miles of me, when I landed, and he offered a ride into Orosi. He was going to leave until he saw me land, so he waited 15 minutes until I hiked out of the field. His dog, an Aussie Sheppard, named Murphy, kept me company while I packed up. As it turns out, Mike owns the ranch but is working in Sacramento in the Schwartsnegger cabinet. He’s the head man in the state when it comes to State natural resources (parks, water, minerals, etc.) Mike gave me a ride all the way to Orosi. It was an interesting conversation during the ride into town. There I met up with Jay and Shad and we went looking for other pilots. Good karma to them. 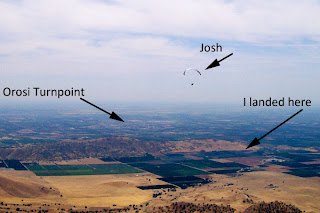 The task on Sun. was a leg from Dunlap to Orosi, then up Hwy 63 to the 180 junction, back to launch, then to the ranger station. Josh C. was very patient on Sunday and waited for the gaggle to form before starting his transitions. He basically ran a clinic for a few of us by throttling back. I was with him until a few Km short of the Orosi turnpoint when I managed to find a sink-hole that put me on the deck East of Orosi – 20+ miles from my truck.

Five minutes after getting to the road, a pickup stopped and the driver asked me where I was going. “North,” I said. He asked where I wanted to end up. “My truck is at the Dunlap Community Center.” I responded. “Well, hell’s bells hop in!” he yells, “I’m going to Dunlap myself . . . But I’m drinkin’ beer, ya OK with that?” “SHEYA” I responded, not realizing how many had come before the one in his hand. We (his name was Dean) made a stop in Orange Cove for some kick-ass burritos and then he dropped me off at my truck 40 minutes later. Here’s hoping your back surgery goes well in July, Dean. 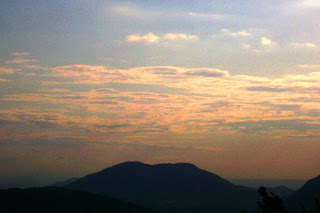 I must be living right because both of these retrieves could have been 4 hour fiascos. Instead they were efficient, quick, and enjoyable. If you are ever driving along, and you see a guy next to the road with a floppy hat, sunburned nose, big-bag, neoprene purse, and hard to read sign that says “GLIDER PILOT NEEDS RIDE”, stop and pick me up. Your adventure will be part of mine – hopefully you will enjoy your adventures as much as I do mine.

4hrs.. I thought you enjoyed your time with me in the hills around Dunlap....grin

I'd rather be flying with you than hiking with you - but the company would be good -
Fly safe KMac.