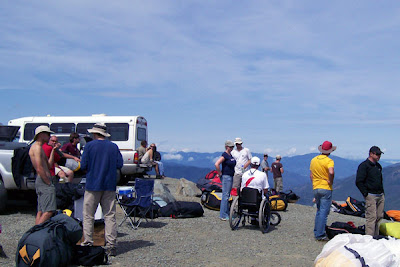 When we arrived at launch the skies looked good in three quadrants. The view to the South of launch indicated we were destined to have large dark clouds early in the day however. 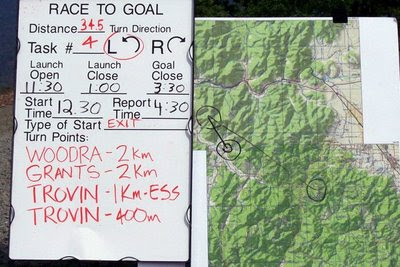 The task was a 34Km flight from Woodrat Pk. to Grant's Pk. to Trovin (a nice LZ located adjacent to a winery that is pilot-friendly). It was very similar to the task we tried to run yesterday.

I launched with 30 minutes before the start and was scratching in front of the 'mid-launch' when the discussion among the weather pilots and Mike began. "It's a 2" - "The cell is starting to rumble already." - "It's not IF, but WHEN you are going to cancel the day." With about 15 minutes to the start time, the task was canceled. Many relieved pilots landed in the LZ below launch and we were sprinkled by rain as we packed up. The call, again, was the right call. This is the view from the LZ, looking at the launch hill, just before it began to sprinkle. 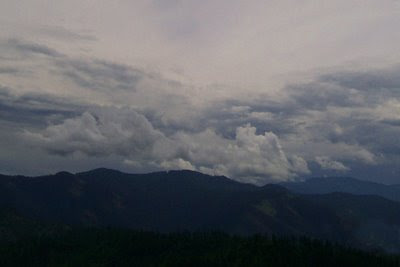 Ironically the clouds that had appeared so ominous, suddenly dispersed and the skies over the launch and LZ became very friendly looking. Some pilots headed on course to Grant's Pass, and I wouldn't doubt that they have great flights, but my experience with Thunderstorms (capitalized due to some major respect) is that they are best left alone. They are unpredictable and fast-moving. When I'm strapped to a paraglider, I am anything BUT fast-moving. If I'm going to avoid T-storms, I go for the head start, every time. Below is a very short video of what the weather looked like when we packed up.

So, with four days of flying behind us, we only have 2 tasks scored and they each were less than 700 and 800 point days respectively. The Friday and Saturday forecasts look good, so I'm expecting to have at least 4 days scored this week.

Scores can be found at http://www.flyxc.org/2009WCPC.html