Today we met at WCPC HQ under broken cloud layers similar to those of previous mornings. The forecast called for clearing with more North West winds than on previous days. We were joined by 15 kids from the local elementary school who rode to launch with a few of us. The kids were enjoying their first day of Summer vacation and chose to watch the paragliders. 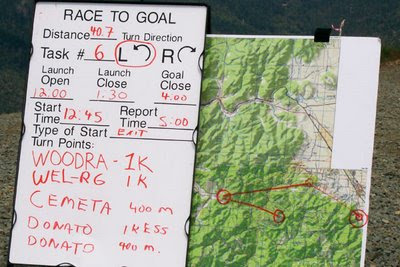 A 40Km task was called from Woodrat to WelRG to Cemetery to Donato. Things looked good for a fun day of flying with many layers of clouds visible from launch. At one point a rather risque looking cloud formed right in front of launch. It was soon dubbed "cumuluscockenbalus" by those meteorologists in attendance. 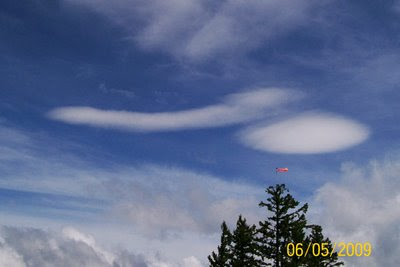 I launched early and made a few ragged climbs to work around the peak to find the best climb. Soon I found myself getting low in a down-shaded cycle and frustratingly, unable to get high. I fought with 10-16kt wind-blown thermals for 49 minutes and eventually ended in the LZ at the base of the hill.

My vantage point in the LZ offered a good view of the race. Many of the guys were over Rabies and basically stuck in the wind - unable to penetrate into the first turnpoint without getting low in a place that was uncomfortable. Josh and Nick managed to get into the turnpoint and soon they were WAY out in front and flew over Burnt in good shape. About 20 minutes later I saw Hayden go by, also on his way to cemetery. As it turned out, only Hayden made goal and Josh and Nick made it within 6 Km of goal.

Today was my character builder. I've been fortunate until today to get up and into the race for the first couple tasks - that fortune ended today.

I just returned from the hamburger feed at HQ and I am amazed at how devalued this task was. Hayden, who flew the entire task to goal, only earned 175 points! This was a remarkable accomplishment that was devalued due to the small number of pilots making it along the courseline. All but 4 pilots landed within 8KM of the start. The results changed very little due to the low scores for the day. I'm still in 4th in the serial class and 12th overall.