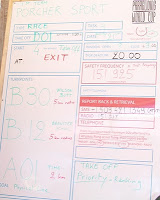 
From the looks of the weather forecast, the task called seemed reasonable.  Unfortunately conditions on course were not as forecast, with stronger winds from the North and somewhat weaker climbs than expected.  The combination of factors put a lot of pilots on the deck prematurely and made the day, for those pilots who made it back to Chelan, a very long one. 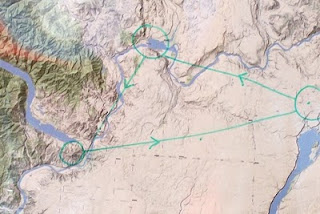 The lift over the Butte, prior to the start, was a bit weak and fickle.  This caused the 100 pilots to roam hungrily for the best scrap of lift.  When the 1:15 start time elapsed everyone headed across the gap to the rim of the Columbia.  Once established on the rim, things went well.  It was immediately obvious that the North component of the wind was going to be a factor and most pilots flew well North of the courseline.  This strategy worked very well since some of the climbs around Mansfield became very weak, causing pilots to frisbie downwind into a position where all they could do was penetrate back into the wind to start the entire process all over again.

The clouds were filling in well by now and it looked like great conditions.  Occasionally I encountered a snotty thermal, but generally lift was on the weak side.  My day was a short one as I passed through a couple areas weak lift looking for better, only to be decked 10 minutes later by some serious sink that just never ended.  I landed about at 32K - Mainly mad that I had squandered a fantastic looking day.

The day went better for most - 25 pilots made it more than 100K and 8 pilots made it to the Brewster School waypoint.  Once at the Brewster TP, it was a downwind leg to goal.  We had 6 or 7 pilots make it into the goal field but only one pilot, Jack Brown, made it before the goal close time of 8PM.  He crossed the ESS at 7:33pm and made it to goal just in time.  The other pilots were unable to get to goal by 8.
Thursday looks windy and we may get a bit of rest -

The top 5 on Wednesday -


For those who would like a video taste of what it's like up here try this video or these..