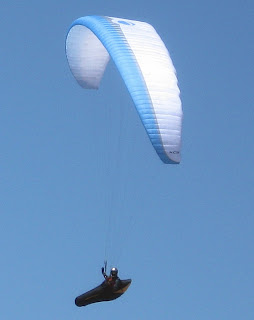 For those who are watching this blog for info on my experiences with the Gradient Avax XC3, I can say this - It is one sweet wing.  My hope was that the wing would retain the handling of the XC2 while displaying increased performance, and the guys at Gradient pulled this off magnificently.

The wing feels and responds to inputs much like the XC2; so much so that I felt very comfortable close to the terrain and flying strong, rough thermals over the flats of Eastern Washington, on my first flights of the Chelan PWC.  The trailing edge is a bit firmer than the XC2 without that 'stiff-brake' feeling exhibited by the Gin and Niviuk EN-D wings.  The brake travel is about the same as the XC2 but I find the XC3 to have less spin tendency than even the XC2.  I still haven't reached the spin point while flying the wing in very snotty tight thermals.  The wing is very good at communicating the location of the 'bubble' core of the thermal.  The wing is very communicative while not being jittery or twitchy.  The ride is pure Gradient - not stiff and rough - more cushioned but firm. . .
There have been reserve tosses every day in Chelan but my wing has been purring along with nary a tuck.  I was able to get the wing to frontal while flying at 3/4 bar on the practice day (my first real flight on the wing) and was able to save it by reducing the bar and a brief, sharp, tug on the "C" risers to keep the tips back.  The frontal promptly popped out and away we flew, on heading and on speed again.  I love this wing -
I'll explore the corners of the envelope more when I'm in better air & less gaggle traffic -
The build of the wing is still very light but durable.  The ribs at the leading edge are reinforced with partial mylar laminations with plastic 'strimmer lines' about 3/4" from the leading edge of the wing, running from the top of the nose of the airfoil along the bottom edge to 5" or so beyond the "A" attachment points.  There are 'gibus arches' incorporated in the ribs along the "B" attachment points.
On the third task of the PWC the conditions at launch were very light and fickle.  The launch queue was moving very slowly as many were having fits coaxing their 2 and 3-liners into the crossed light winds.  I laid out and brought the wing up easily, built it on the way up and got off the hill easily - Much like the XC2 in it's easy ground handling.  I used "As and Cs" alot on the XC2 but am using the brakes and As on this wing because it only has the 3-lines.
Speed-bar is fully usable and very effective.  I can feel that beyond 3/4 bar the glide is affected quite a bit, but 3/4 or less is very effective in keeping up with comp ships.  I had many transitions where I was gliding with comp ships and getting to lift sources at the same altitude and time as they.  Flying this wing gives me the mind-set that I'm on a competitive wing.  I don't have any direct comparisons against the few GTOs and Omega 8s, here in Chelan, but the Boom and R-10 pilots flying with me are indicating that I'm getting excellent transitions with them.  Climbs are also very good.  The sink rate has been improved from the XC2 and the handling is good enough that it's possible to use the rough lift more effectively than the less maneuverable ships.
Landing is simple - enough said?
These are my early impressions, but I think that there is little lurking for me to discover.  I've been flying in rough conditions for 5 days now and am very happy with this wing.  Highly recommended for pilots with the experience to fly a high-end EN-D wing, especially recommend for pilots who like the gradient handling and/or have experience on the XC2.
Tim
Posted by Tim at Thursday, July 22, 2010
Email ThisBlogThis!Share to TwitterShare to FacebookShare to Pinterest
Labels: flight characteristics, Gradient Avax XC2, Gradient Avax XC3

as an xc3 flyer myself I appreciate your feedback. RT