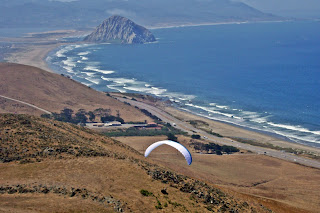 I received my new Gradien Avax XC3 yesterday and kited it for an hour.  Today I flew 2 sled rides off a 700' hike-up to check the trim and handling of the wing, before I head out tomorrow to fly in the Chelan PWC.

Here are a few of my initial impressions.  I'm sure I'll have more meaningful info next week, after climbing in 8 meter/sec thermals and pushing the bar all day.  But for those of you who like the minutia, and are looking for any info about this new wing, here's a bit -
My Background:
Most Recent Wings: Gradient Avax XC2-26 (220 hrs)Gradient Aspen2-28 (120 hrs) – Airwave Sport 2 (200 hrs) – Gin Bandit (40 hrs) – Edel Confidence (80 hrs) 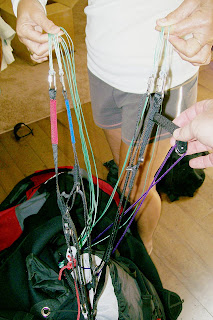 The XC-3 is a 28 meter wing (100k-115k), standard blue color.  The bottom of the wing is all white with a small Gradient (smileyface) logo at the centerline at the leading edge and trailing edge of the wing.  The blue is a lighter, baby blue, than the blue used on my previous Gradient wings (Aspen 2 and Avax XC2). I chose the 28 since I'm flying a heavier harness now & the XC3 is a meter smaller than it's XC2 counterpart.

The lines are thin, unsheathed Edelrid Aramid - 1.2mm to .5mm in a 3-riser configuration which reduces line length by about 20%.

The speed system on the XC3 is a 2-pulley system and is easier to use than the one-pulley XC2 system.  I really didn't find the one-pulley to be a problem, but the XC3 will be much easier to modulate and hold speed for those long transitions. 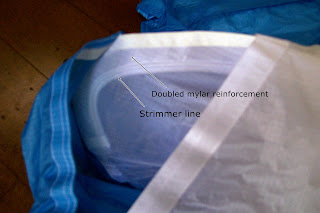 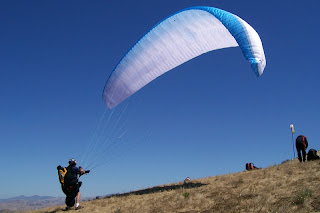 The Aspect Ratio of 6.8 and 3-line configuration made the wing a different animal while ground handling, but using A's and brakes was very effective in controlling the wing without the Aspen like launch into the air.  The tips seem a bit more 'sticky' on the XC3 than they were on the XC2.  I'll be watching this more next week, but in the small assymetrics I pulled today, the tips needed patient pumps to come out.  Control was very good during the recovery.

Launch is very Avax XC2-like. The wing comes up easily and can be stopped accurately with brakes or rear-risers. Directional control is good. No bad habits.


Landing was very straightforward.  Good control and no problem deep in the brakes during the swing-through flare.


Like I said, I will (hopefully) get 15-20 hours on this wing in race conditions, next week.  I'll have much more meaningful info then.


For my complete bit of feedback on flying the XC3 go HERE.
Tim
Posted by Tim at Wednesday, July 14, 2010
Email ThisBlogThis!Share to TwitterShare to FacebookShare to Pinterest
Labels: flight characteristics, Gradient Avax XC3