The day started slowly and lift was weak at the Butte. The start gaggle, once again was an unorganized mob, roaming for any available lift. There were two groups heading North from launch. Those that I flew with, crossed to the rim & the flats before turning North. The other group headed over the Chelan airport & to the high ground on the West side of the gorge.

Those of us who crossed to the rim were, soon, desperate. I found myself circling in zeros waiting for someone to get established in lift. Finally my zeros became 150'/min and everyone came to me. The lift continued to bloom to 600'/min. and the race was on. A few of the pilots I flew with dirted at the rim; others bombed out prior to making it across. For the next 35K it was climb/glide/repeat until approaching the Brewster area. I found myself getting low and dove into a spot that seemed likely to produce lift. This was my last act - before landing on a dirt road next to the wheat fields South of Brewster. 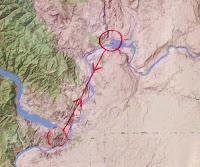 The group that proceeded along the West route made good time until reaching Brewster where they found broken thermals and strong winds from the SW. Many of both groups dirted South of Brewster. The few that made it back to Chelan had trouble hitting the 400M cylinder around the Chelan Butte. There were 7 in goal today. Josh Cohn scored well enough to cinch the podium.


Five of the Top-Ten are from the USA - a great showing for the first PWC on US soil in 18 years.  Congrats to Josh, Nick, Jack, Len, and Dean.  All the top-ten pilots deserve respect for enduring the long rough tasks assigned during the Chelan PWC.  I really had a great time.  Doug and Denise Stroop did a great job of running a fun, friendly comp and I hope they can be convinced to do it again.


Results are HERE
My Flight is HERE

My performance during the first two tasks was fairly good (in 44th place after two tasks) but the last three tasks were not my best effort.  I made some serious mistakes that put me on the dirt before really getting into the meat of the tasks.  I finished the comp in 66th place.  With any luck I'll learn from the mistakes I made and improve my flying before the Sun Valley Nat's in August.