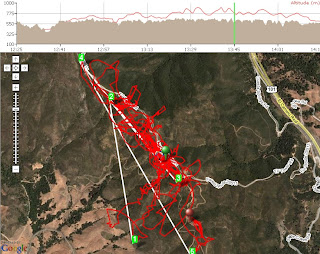 Today was only my second flight since I flew at the SIV clinic in mid October. A couple of weeks ago I had a magical flight at Shell Beach, a beautiful sea-side flying spot that generally depends on on-shore breezes to provide a thin band of lift parallel to the bluffs above the beach. Tom M. launched early in spite of the general negative prognostications of the local experts and was able to stay up so I suited up. I was very lucky & had perfect timing since the wind was freshly blowing on-shore as I launched. Five minutes later it would have been impossible to launch due to the wind switching to a calm or offshore breeze.

What had happened was that a strong convergence line had formed between the on-shore and Santa Ana-like breeze that we experienced inland. As it moved across launch, I was able to just fly the convergence and Tom & I were treated to a beautiful flight that took us to heights unusual for this site. I carried no altimeter, but guess that I hit 1500 to 2000' above the sea. The view was great & a great first flight at the site.

Today we headed up to Cuesta - I had high hopes since my forecast indicated very light winds. Patrick, Eric, Jack, Dave & I all arrived at launch around noon. Eric & Pat launched first & didn't get high, but flew around launch altitude for 15 minutes. They were both able to top-land & wait for things to improve. I was ready to fly & decided it looked soarable, so I launched into a nice gentle cycle. A nice thermal was right off the launch & I went up about 50' right away.

Soon I was touring the ridge looking for any shard of lift I could work. Within 12 minutes I was down to 1200' MSL (about 200' above the pasture) & planning where I would land to minimize the hike-up the hill to launch. The I felt a great bubble of lift & it filled my wing from right to left. As I rolled into my turn, it filled out the whole wing & I climbed back up to launch - much more quickly and easily than if I were to have landed & hiked up. From then on, the day was ON. Lift was everywhere & generally, the down cycles were few & of short duration.

It's not uncommon to fly over the ridge & observe other sportsmen and yahoos in various activities. Today our entertainment was a truckload of mullets, beer, & shotguns, who parked up ridge& proceeded to make clay pigeons into dust. That wasn't the fun part - The fun began when the CHP arrived on scene & showed the proper protocol for approaching multiple guys who have guns. . . all the while I (and others) were lurking quietly above, watching the show ;-)

Anyway, it was a fun day with all of us having good flights. I flew for 2 hours & landed just because everyone else had. The top landing took a couple tries since there was a bullet of a thermal right in front of the spot - but it worked out fine.

Now THIS is cool!

Give it time to load - It's worth it.
This is definitely on my "Before I Die" list.
It's Aiguille du Midi - on Mont Blanc.

http://www.passion-sport.ch/film/Aiguille_Midi.html
if it doesn't load.

Competition Flying to Win? OR To Fly?

Recently, on a forum I frequent, http://www.paraglidingforum.com I managed to derail a discussion about the relative safety of competition wings to the lesser performance - but safer - wings that us mere mortals fly. The certified, and therefor tested wings are rated from DHV 1 (beginner wings) to DHV 3 with performance increasing as the # increases. I competed on my Sport 2 (DHV 1/2) for a year and a half and now am flying my Aspen 2 (DHV 2).

If I ruled the world, we would have competitions that emphasized 'class' racing so there would be winners in each class. This would allow less experienced pilots to earn their 'chops' while competing against others in their class. I found that my response pretty well encapsulated why I enjoy flying XC and XC competitions so much. Here it is:
My Response:

I know many people who 'race' knowing they won't win. They race for racing's sake; for the experience and comraderie. They are happy as long as they see improvement. I think my experiences echo many.

I strive to win tasks & have worked hard to improve my skills and equipment so my ranking is higher year over year. I've only flown PG for 4 years & comps for two, so I'm in the position where my goals to fly competitively are bumping up against the limits of my experience. I've many thousands of hours in other types of flying machines, so I acknowledge my limits and try to push them without hurting myself (usually). I've had intermediate syndrome in sailplanes, powered A/C, and jets, so I know myself pretty well by now. I want to win & I know I won't on my Aspen 2 without a fluke.

BUT, I AM having fun. I'd hazard to say that I'm having more fun than some of my friends who have flown competitively for many years without breaking through their frustrating 'plateau' and find themselves shaken & spent, while flying their 2/3 in rowdy conditions. I'm 52 & I have over 25,000 hours & I'm bored in the cockpit. But put me on the hill, with 100 other PG pilots and the electricity is palpable. The singular focus of my mind while flying an XC task and the amazing insights I've come away with, make flying comps one of the most rewarding experiences of my career. Learning is fun. Even when I place 27th in a national comp, I am proud. Next year I hope to place 26th!

I will, eventually progress to a 2/3, maybe next year - but I'll know when - I won't query the forum.

Tailwinds, and thanks for your contribution to this thread. What do you think about class racing Mads? Pilot vs. pilot - no bells & whistles. True competition. The 2/3 market is well represented by UP, could they use more Trango sales?

Dave S. and I are heading South to OZ in Jan. '08 to fly the Killarney Classic and then travel around looking for good XC for a week. The 2008 US schedule has been determined:

I hope to fly the West Coast Championships in June & the US Nats in Sept.

Posted by Tim at Friday, November 09, 2007
Email ThisBlogThis!Share to TwitterShare to FacebookShare to Pinterest
Labels: 2008 US Paragliding National, US paragliding competition schedule