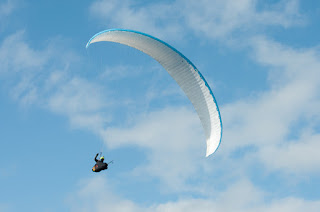 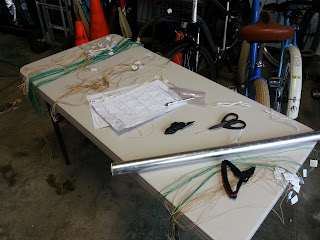 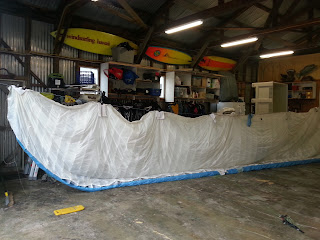 From Cross Country Magazine -
This week's Tuesday Tip comes from Guy Anderson. In the current issue of Cross Country magazine he writes an amazing account of how he survived after crashing in very remote terrain in Sun Valley USA earlier this year. I am no survival expert, just very, very lucky.
So what would I do differently? I’d recommend using a Spot or InReach satellite tracker. Juan, a pilot who landed a couple of kilometres away from me, had a Spot and was picked up at midnight on the first night. Even if I’d been out all night, being able to send a position and an ‘Injured but OK’ message would have spared all the anguish at home. And I’d pack an ‘emergency kit’: Spare radio batteries; a powerpack to charge everything else; a little food; a lighter; a light plastic mirror for signalling; a light waterproof or even a siltarp (very light tarpaulin); mosquito netting; headtorch; strong painkillers; water purification tablets (I drank from a stream but was lucky); and a whistle (I couldn’t shout due to the punctured lung). And finally, to help your rescuers, if you have the strength, try to spread out your glider to make it as visible as possible and even if un-deployed put your reserve out too. Then concentrate on saving your skin. http://www.xcmag.com/2012/11/in-issue-144-guy-andersons-story-of-survival/

* * *
I spent two long days, along with more than 60 other pilots, while searching the big country of Idaho for Guy. When we heard he had been found *alive* it was great news. His candid comments regarding his lack of preparation are refreshing - and a good reminder.   I've written about this before and, at the risk of sounding a nag, I'd like to list some of the stuff I've written.

Regarding the SPOT TRACKER and Survival - http://biggovtsucks.blogspot.com/search/label/rescue
Regarding Survival Kits for XC flyers - Nice Harness - What's in it besides your butt?
And please see my last post.  A special deal ON SPOT - THIS WEEKEND ONLY

SPOT Deal - This weekend ONLY


For those who plan to fly XC this year, whether it is in competition or not, owning and using a SPOT tracker is a great idea. If your decision has been delayed after some negative reports about coverage and dependability I understand, but must respond with anecdotal personal results. I have used a SPOT since 2008 with much success and reliability. Anyone who flies XC in the Western US uses this product religiously. Most leagues and competitions will REQUIRE use of this equipment or it's equivalent. A great deal is available this week and I got mine - I hope you get yours too -

The deal is a time limited offer to get the SPOT unit free for the cost of the $149/yr. service fee.  I'm partaking since it allows me to upgrade my hardware for the annual fee (which may be $30-$40 bucks more than usual, but that's a cheap unit)  Go to http://www.findmespot.com/shop/index.php?main_page=product_info&cPath=3&products_id=5 to have a look at the deal.

Seeya in the air -
Tim

Posted by Tim at Friday, November 23, 2012
Email ThisBlogThis!Share to TwitterShare to FacebookShare to Pinterest
Labels: SPOT