http://www.youtube.com/watch?v=jeYscnFpEyA
Posted by Tim at Saturday, March 28, 2009
Email ThisBlogThis!Share to TwitterShare to FacebookShare to Pinterest

Not a lot of info to add at this point, but I thought I'd report on the outcome after making the final mods to the pod.

The floor (made out of a flexible plastic cutting board) really cuts down the friction between my heel and the pod. This makes activating my speed-bar much more manageable and controllable - allowing 'throttling' of the bar to control the wing. The bungy, tied to the loop of webbing I attached to the nose-piece, keeps the 3-step UP speed-bar laying nicely in the pod.

I have also moved the lower skirt of the pod towards the back of my harness 2.5" - using the velcro already installed on the harness bottom. I then added velcro to the outside of the skirt to hold the forward-bottom edge of the tailpiece (with the ram-air intakes) in its original placement. This process changed the angle of the pod and cleaned up the profile of the bottom of the pod/harness connection.

I've now flown the installation for a few flights and am very pleased with the outcome. 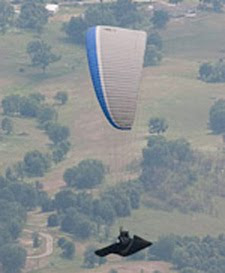 A week ago I started my mod of my harness, by adding a pod. You can see Part One HERE. I've also made a few additional changes.
I've had a couple flights with my pod installed and really like the product so far. I am not totally satisfied with the mod, yet, though. I have encountered a couple problems.

1. The top (front) of the skirt has a lot of weight due to the front mounted reserve. This creates an issue when launching and groundhandling. When the risers are not under load, the pod skirt tends to fall forward over the carabiners. There is also a lot of stress on the seams where the carabiners support the pod.

2. When activating the speed bar (a 3-step UP ladder type) my heel tends to rub with much friction on the bottom surface of the pod. The XC2 has a very stiff push to activate the speed-bar already and the additional friction makes using the bar almost impossible and may cause wear of the pod. 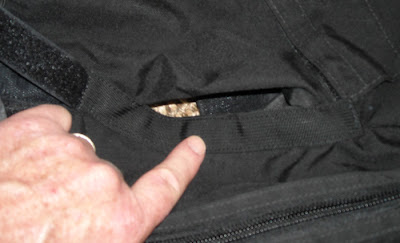 To remedy the issues I added a strip of 1" webbing along the opening for the carabiners that crosses both seams to strengthen them. 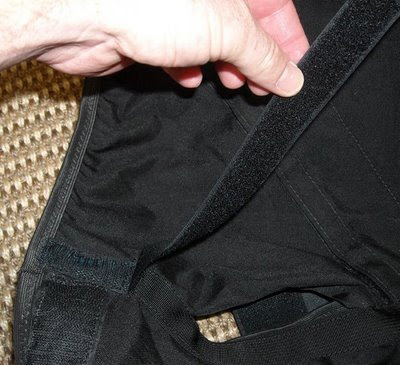 I also added a strip of velcro that is wrapped around the carabiner and holds the skirt in place when the risers are not held vertical. 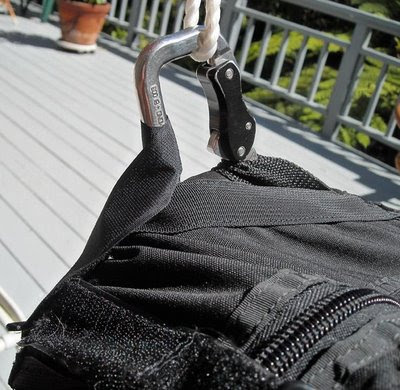 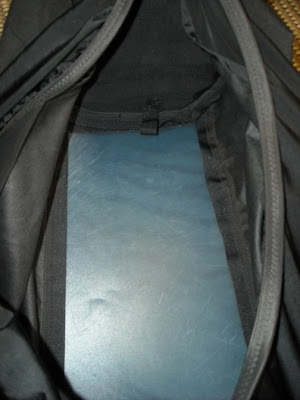 To fix my second issue I laid a 1/16" thick plastic cutting board, trimmed to shape, that fit between the piping at the floor seams. Sewn to the seams was a strip of 1" velcro, which holds the plastic in place, as well as physically capturing the plastic sheet. 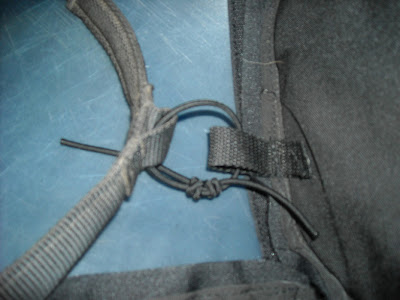 Next I sewed a loop to the nosepiece which allows a 1/8" bungee to hold the stirrup in position for easy access. 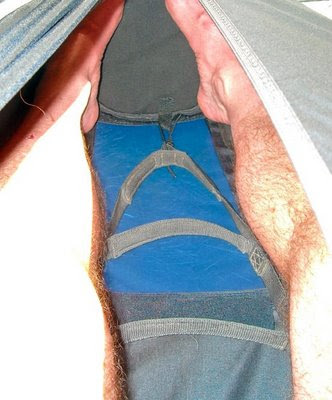 I'll be flying the new mods soon & hope to have a workable system before the first comp of the season.

Another fun day at Cayucos

Today was another glorious day at Cayucos. I really prefer higher flights, but it's hard not to appreciate the chance to fly over such spectacular beauty on such a great day with my friends.

Another Beautiful Day to Paraglide at Cayucos from Tim O'Neill on Vimeo.

Today was a fun day at Cayucos. The hill is a 700' high walk-up that works with a West wind. The forecast was for high winds in the afternoon so we all hit the hill early. Once the wind freshened we all launched into buoyant lift. I was getting the kinks out of my new pod set-up and top-landed to do some adjustments.

The wind came up subtly and soon the sea showed some whitecaps. I headed for the beach a bit later than I should have and landed just as the wind approached the limit for a safe landing.

Here's some video of the flight.

A day at Cayucos from Tim O'Neill on Vimeo
Posted by Tim at Saturday, March 14, 2009
Email ThisBlogThis!Share to TwitterShare to FacebookShare to Pinterest
Labels: Cayucos

Well, if you were to have read an entry from late Dec. '08, you might remember a post labeled 'Project Time'. I had ordered a leg covering, or POD, from UP. UP is a paraglider producer in Germany. Somewhere along the line things got lost in translation between my supplier and UP for the last 3 months. I'd like to thank Rob and Ty at Eagle Paragliding for staying on things so that the outcome was successful. It isn't unusual for the PG supply pipeline to have some kinks and clogs in it, but Rob is a good expediter and a stand-up guy.

My goal was to add the pod and make whatever modifications to the harness were necessary to do this, BUT I wanted the ability to fly the harness without the pod if I chose to. Since the leg cover mounts to the bottom of the harness I had to move my reserve to the front mounted position. For this reason I ordered the version with the integral reserve container. Moving the reserve was straight forward. The pod has bridle routes that cover the bridle on either side.

The UP Speed cover is made of good quality materials and appears to be fairly durable. It consists of a stretchy material on the top surface of the pod (with the split for entry/exit from the pod) and a light but sturdy Nylon fabric for the sides and bottom of the pod. A heavy-duty zipper is used to join the front of the pod at the waist strap between the carabiners.

The nose cone on this pod has a 2in. hole that allows ram air to inflate the cone. The bottom surface of the pod skirt has Velcro sewn into the skirt to facilitate attachment to the harness. I sewed strips of mating velcro to the harness, just forward of the Ram Race's tailpiece ram-air intakes.

Because the bulk of the front mounted reserve makes it impossible to use my existing flight deck I made my own instrument deck that mounts to the Velcro on the reserve container.

I stand 69in. and 175 lbs. and the Medium size is perfect for me. Anyone taller should opt for the large. The video below shows some of the details of the mod.

The complete project took less than 4 hours and $25 for professional sewing. The results are a good looking and comfortable leg covering. This pod looks like it would work on a number of similar harnesses.

I made some additional changes after flying a couple flights.
They can be seen HERE.

PodMod from Tim O'Neill on Vimeo

I can't wait to fly it. I hope to get a chance this weekend at the Santa Barbara event.

The prediction for today looked good for a flight at Cuesta - Probably not a day to go XC, but flyable. It was a bit dicey looking since the windtalker indicated an Easterly flow on the ridge. On the drive down I took this picture of the convergence clouds mid-valley over the Men's Colony near Hwy 1. 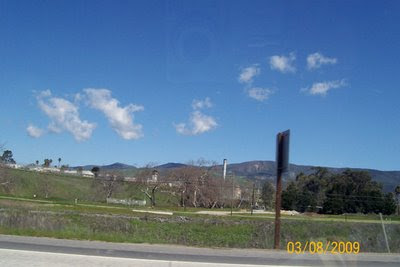 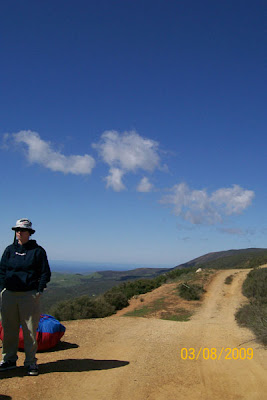 I got to the top around 12:20 and met Dave and Eric and Sharon. There were substantial puffs from over the back, indicating that the convergence was still out in front of launch. This was backed up by the clouds. I still was optimistic that the puffs would turn and soon cycles would be rolling up launch. After a half hour or so, Eric & Sharon decided to head down the hill for more interesting activities.

Dave & I hung out looking for encouraging signs. Soon the thermal birds reappeared. Then we saw a big bird work up from low altitude and head NW along the convergence line without flapping or loosing altitude. When the puffs started coming up the launch from the West I suited up and took off into great lift that took me right to 3000'. Dave launched soon after I did and we explored the area mapping the convergence by climbing, then reaching out until 1000'/min. sink forced us back to the lifty area. Our reach wasn't that far before being hammered by massive sink so this was a local flight. Eventually the convergence moved to a position behind launch and we flew in relatively trashy air until we landed down the ridge, by the 'X'.

A fun day & worth waiting for.

Tim
Posted by Tim at Sunday, March 08, 2009
Email ThisBlogThis!Share to TwitterShare to FacebookShare to Pinterest

The season is just about to start

The video can be downloaded HERE It looks great in 'full-screen.'

Tim
Posted by Tim at Saturday, March 07, 2009
Email ThisBlogThis!Share to TwitterShare to FacebookShare to Pinterest