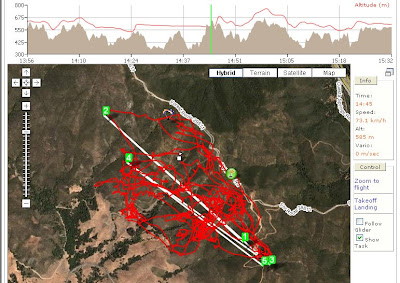 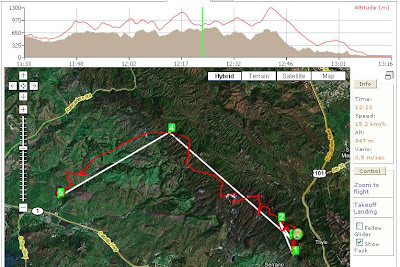 My XC Skies forecast indicated that today might be good at the Cuesta Ridge. . . It was. The winds were light from the SSW and lift was 400-600fpm. up to 4000'. I launched around noon and promptly dropped 300' below launch before finding my first good climb of the day. Patrick & Eric launched about then and we all flew around the ridge. I was higher & able to get some good high climbs over the high ground, so I pressed NW along the ridge. HERE is my flight.

Soon I was farther North than I've ever flown from the Cuesta launch and in excellent shape at around 4000'. The climbs were very good along a line of convergence along the ridge & I was finally looking at the choice of either pressing out towards Highway 1 (and an easy landing and retrieve) or crossing Highway 41 and potentially landing in the Hwy 41 corridor. I was a bit worried about the winds in the steep, narrow Hwy 41 corridor, so I opted to head out front to the small hills next to Hwy 1 & towards Morro Bay.

My GPS was not supplying me with wind velocity information today (bugger!) so I was estimating 5-10 kts. of wind from the SW at altitude & W near the surface. I found some weak lift & ridge lift as I got low & worked out to about 1/2 mile from Hwy 1 at San Bernardo Creek Rd. The landing was textbook & I was able to catch Mary at home & talk her into giving me a lift back to launch. Patrick & Eric stayed a bit closer to launch & were hiking back to their cars at the top.

Since I hadn't done any exercise for the day, I had Mary drop me off at the beginning of the road to launch & hiked up to my truck. A great day & fun flying. 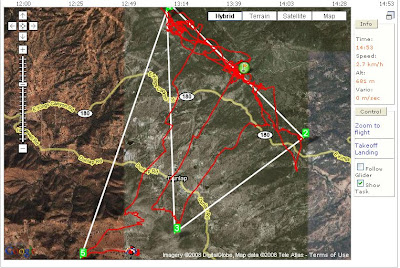 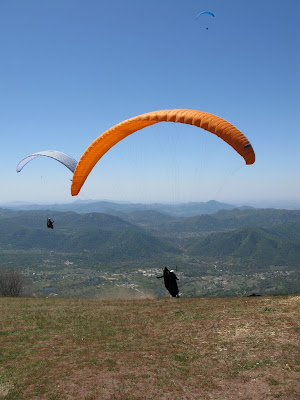 The weather hasn't allowed for much flying for the last 2 weeks. My AVAX XC2 is patiently waiting in its bag for me to give it a chance to fly. 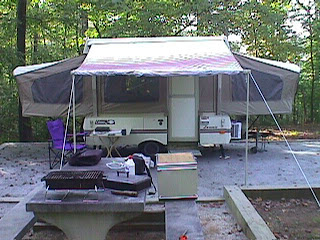 I've taken this opportunity to work on my 1987 Starcraft pop-up tent trailer. This new acquisition is a cheap, comfortable, fun, and convenient answer to the question, "Where are you going to stay during the competition?" The camper can be set-up in 15 minutes and sleeps 4 comfortably and 6 in a pinch. It has a sink, 2-burner propane stove, and a self contained 12v. electrical system. I've spruced up the bunk mattresses so they are as comfortable as any motel. All it needs now is a 12v. blender to make margaritas . . . I plan to spend as many as 24 nights in this rig over the summer.

I've also posted a list (on the right side of the blog) of 'articles' I've written this year.

The first is just a compilation of responses to a thread I started on the PG Forum from competition paraglider pilots who were willing to provide some tips.

The next is an article I wrote for the USHPA magazine, HANG GLIDING AND PARAGLIDING.
It was published a few months ago. It offers some recommendations for survival kits to be carried on XC flights. Yes, I do actually carry what I talk about in the article.

Finally there is a link to a Competino / 5020 Cheat Sheet that I wrote over a year ago. A large number of these integrated GPS/Vario units are on the used market now & maybe, this document will help some of the new users. It was written for the older firmware, but most of the procedural info is still valid.