Is Bear Grylls an Idiot, or What?

A bit of a diversion - An old post I wrote about a subject I feel is important.  No less so, today. . .

Ok, I know that there are quite a few who speak less than kindly about Bear Grylls and his cheesy survival shows on TV.  And I don't want to be perceived as "piling-on", but after watching one of his programs today about survival in the New Mexico desert all I can blurt is WTF!?


Repeat after me - ''If I'm stuck in the desert, and fighting for survival, I won't compound the perils by taking stupid chances, doing unnecessary but visually interesting stunts.''

In this episode Bear decides to throw a rope across to a rock pinnacle because he doesn't have enough rope to rappel to the bottom of a 30' ravine.  As he shimmies across the gap, his makeshift grappling hook gives way and he almost (wow it was thrilling) falls. . .  What you'll never hear on one of his shows is "Geez, that was a really dumb idea - on second thought, maybe it would be better to take the safer, long way around."  And that's my point - He's not teaching you anything you'll really need to know for survival.  He's pandering to the couch-sloths that inhabit most of America.  The lazy majority that bitch because they have to walk  waddle the 100 feet from their parking spot to the Wal Mart - they are Bear's audience.  They are the folks who go to Yosemite and only leave the car when an opportunity to pick up a bag of Cheetos presents itself.  What's really funny (to me anyway) is that his audience is probably reacting to his antics with the same incredulity as I am - just for different reasons.

The 'don't-doers,' that are Bear's audience, can't conceive of the idea that someone would actually go into the wild for fun and adventure.  The fact he's peeing into a snake skin and then wearing it, as a necklace, for 2 days in case he needs to drink it is no more absurd than the fact that the crazy mofo is out in the boonies in the first place.

Those of us with some survival knowledge and a love of the outdoors, are just marveling at his ability to look at a situation and find the most treacherous and idiotic solution to the problem.  He is, in short, someone I refer to as a 'SHIT-MAGNET.'  He's a guy who discovers a river and then decides to jump 80' into it without any idea how deep the water is.  Or a guy who climbs down a chimney and discovers he's rim-locked - No way back up, and no way down. . . He's not teaching survival - He's showing you how people die.  He's just playing with fate.  The secret to survival when you find yourself in a character-building moment is to act carefully and reasonably.  The second you feel desperate, you will start doing desperate things.  The most devastating occurrence, when in a remote survival situation, is injury.  Stay healthy and you will have time to fix the situation.  Don't drink dangerous water or eat foul meat, or glissade down a steep slope on a yak carcass, at breakneck speeds - it makes great TV, but it's not good survival technique.  We're talking about life & death here - you have to consider the risk/reward of taking a risky short-cut, or eating dodgy food that will likely give you a GI problem and deplete you of hydration as you vomit and diarrhea your way to civilization.

Now don't get me wrong, I enjoy watching this guy eat a raw lizard, drink his own piss and squeeze brown effluent out of a 20 lb. elephant turd as much as the next guy, but don't sell it as a survival show.  It's as much a survival show as the 'wild mustangs' he lassoed were wild, and as real as the volcanic gasses created with smoke machines. Bear is a TV personality and he's making a good living as such - more power to him.  I just wish he wasn't hyping his antics as education.  On that score he is an idiot.


If you want to learn about survival read these books:


If you must watch TV for your survival education at least watch Survivorman.  He's still a TV host, but at least he doesn't advocate risking injury and death when you are in a pickle.

So, IS Bear Grylls an Idiot?  No, he's probably not - But YOU are, if you try to survive using his methods and advice.
Tim

Flight from the Dam to the Pier

I had the chance to fly a route that I've struggled with, off and on, for years.  The conditions never seemed to come together properly to make the flight possible.  Looking back at it now though, I never pushed to the point of forcing an out-landing North of the dam.

The day was a fairly low day with the occasional bullet thermals allowing climbs to 1100'.   I started off by catching a nice climb into the convergence zone over the main hill.  From then on, it was a low flight back to the dam.  I found a short 100' climb, here and there, which allowed me to work North of the dam and get to the low hill North of the canyon the spillway runs through.  I surfed up the ridge with a juvenile Eagle and the went on a comfortable glide to the Cayucos Pier.

I treated myself to a Smokehouse taco and then hiked the 2 miles back to the base of the hill, where I snagged a ride up for a second round of flying.  Great fun day.  Here's the video -

I've been working a project, off and on for about 3 months.  I found a general plan for a home-made chase-cam online and modified it to fit my needs.

The basics parts are:
First cut the bottom end off the 2-liter bottle.   Then put three equally spaced, 1" diameter holes in the "shoulder" of the top of the bottle (see photos) to allow airflow through the body of the bottle.

Attach the fins to the bottle with epoxy cement.

Drill out a !/4" hole through the bottle cap and the mounting swivel.

Assemble using washers and nuts to provide a secure attachement for the camera mounting swivel. 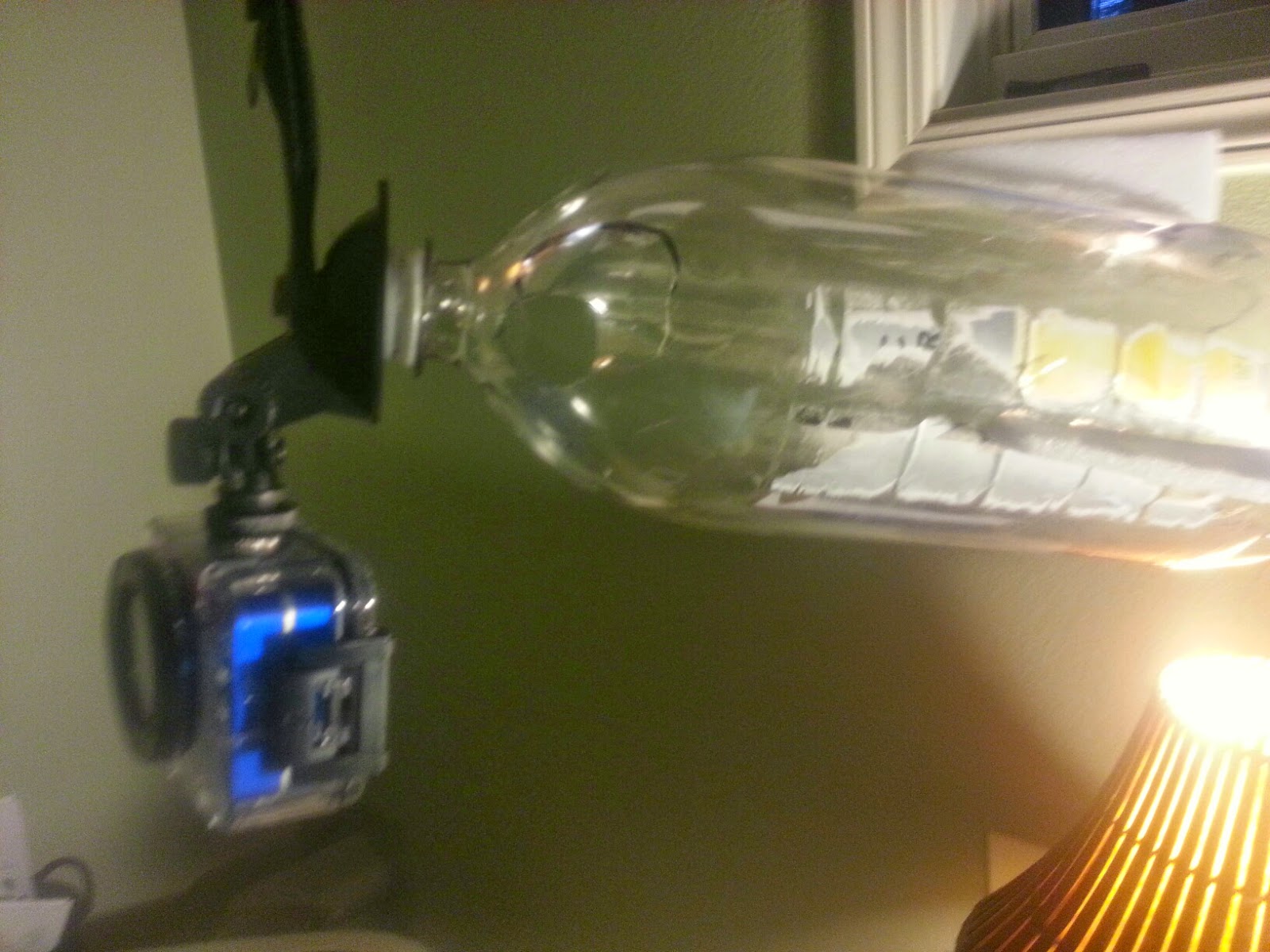 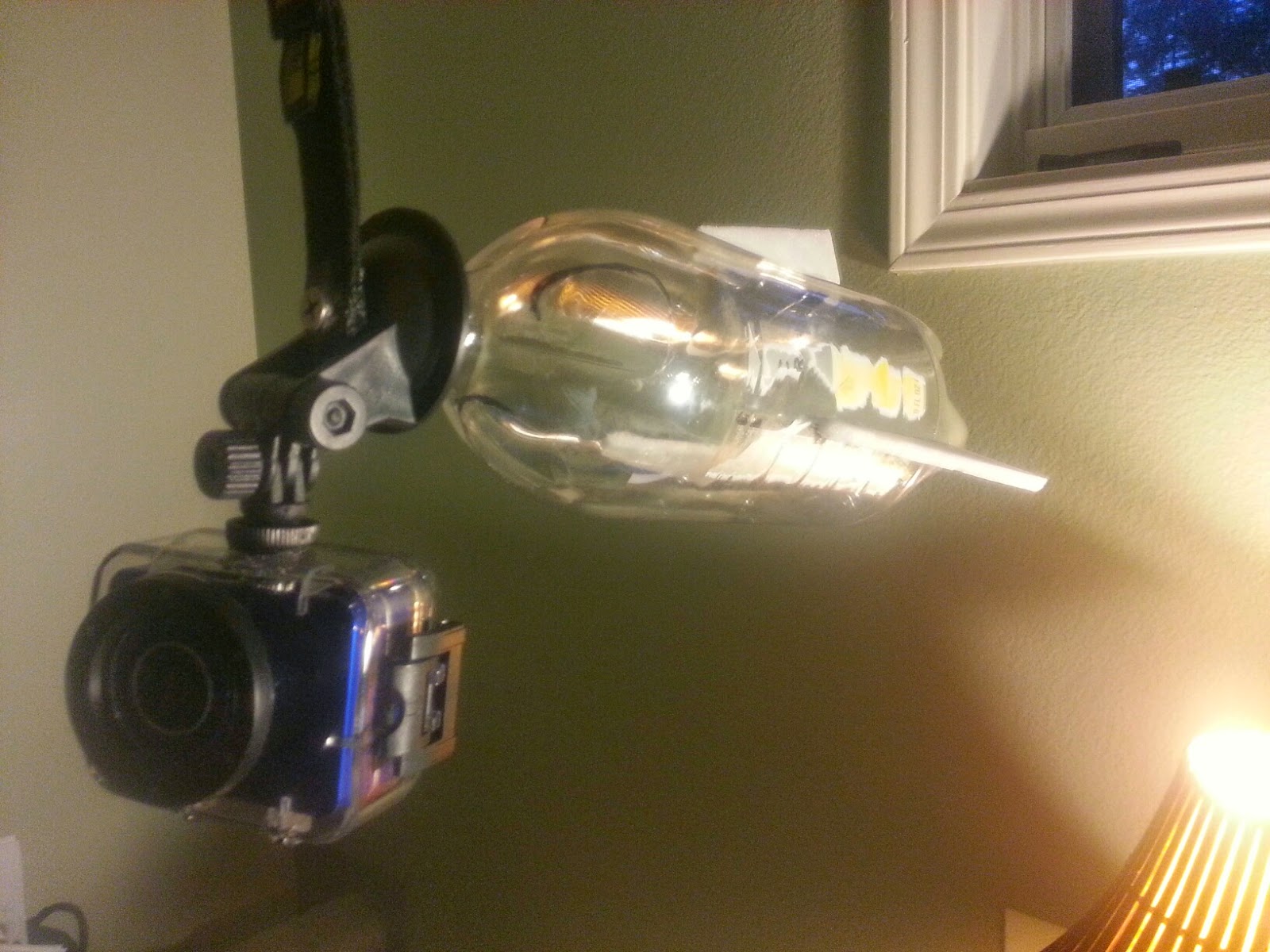 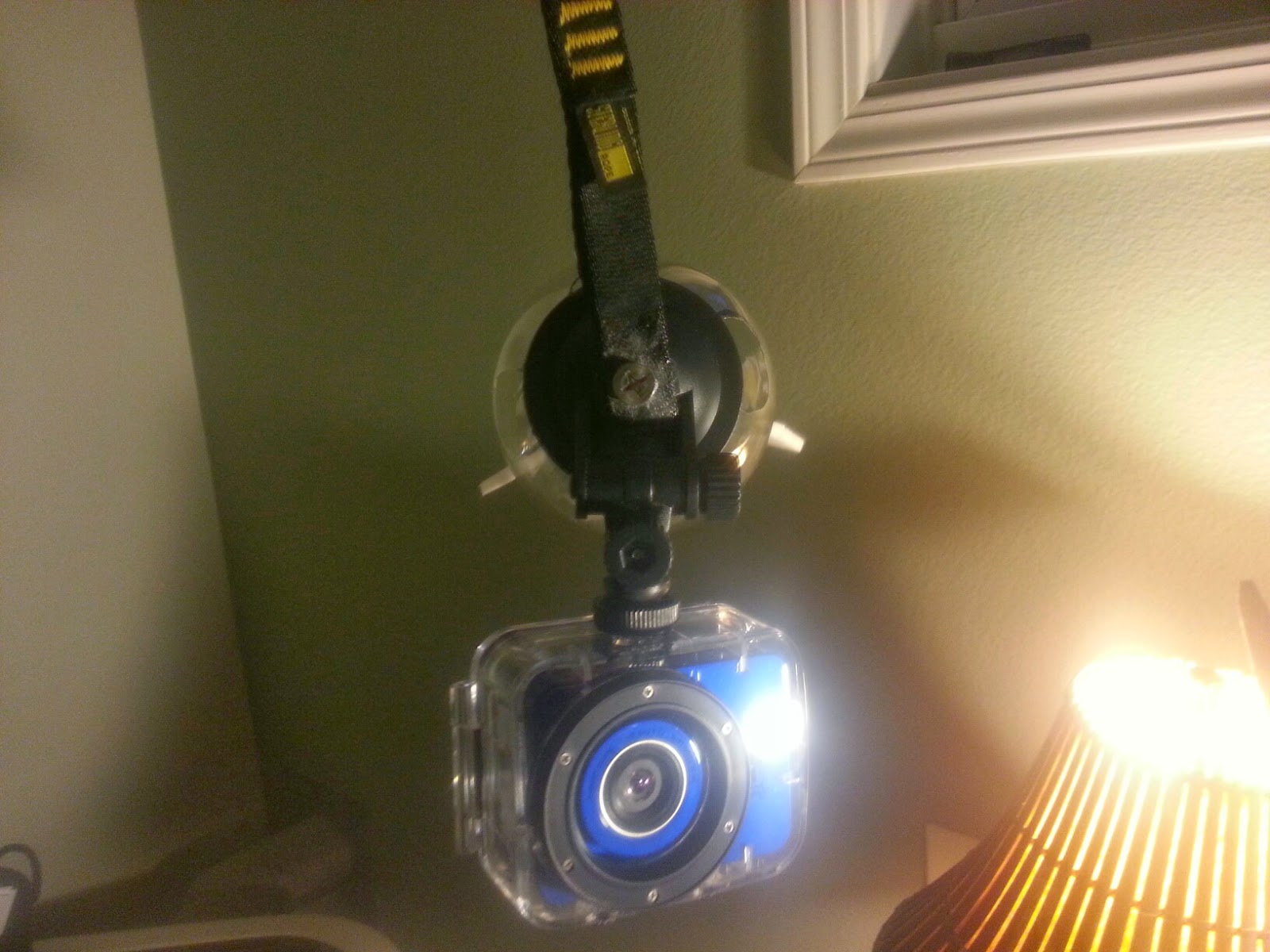 Your camera and swivel mount may require different balancing; use small weights to make the rig balance properly.

I attached the webbing on the camera mount to the spare paraglider line and then attached the top of the line to a rear attachment point about 5 feet left of centerline.  You may want to try other mounting points.  B-lines or C-lines may be more stable.  I used the trailing edge on my Icepeak 6 since options are few for mounting points on a 2-liner.  The camera is aimed to provide a view of the pilot and ample view of the forward panorama.

As can be expected,  this additional line and the mass swinging from your trailing edge can result in tangling during launch or accidental collapse.  I would caution use of this set-up to be limited to benign conditions and experienced pilotos.

Cayucos 3-31-14 from Tim O'Neill on Vimeo.
A challenging day at Cayucos. Fun to fly the Icepeak 6 this season. First good test of the chase-cam.