For an interesting twist to the B1Nav saga, see THIS.

I've been fortunate enough to have the opportunity to try out the Flymaster B1 Nav integrated variometer.   The unit was delivered to me while flying in the Chelan, PWC event and I flew it without much prior knowledge of the capabilities and user interface (UI) of the unit. I carry an aging Flytec 5020 and a Garmin 76S on my cockpit usually and am very comfortable and familiar with the combination.  Adding the B1 Nav to the mix would be interesting . . . especially adding it to my scan while competing in a XC comp.  I really didn't know what to expect from this new instrument and had limited expectations since its price is quite a bit less than the other, comparable instruments on the market.   One thing I had noticed was the enthusiasm displayed by those pilots using the B1 Nav.  Especially regarding customer service and the firmware improvements made in response to user feedback. Cristiano Pereira, founder and software developer for Flymaster, is very active on the Flymaster Google Group and I have seen requests from pilots go from idea to implemented firmware update in 48 hours.  The value of integrated flight instruments is their ability to reduce the pilot's workload; to 'get things out of the way' and allow him to think about the task and the course.  All of the available units do this.  My goal was to find out if THIS instrument does what is expected and what it does well. . . or not -

General Impressions -
The B1 NAV comes boxed with a very nice storage case to protect the unit when knocking around in your kit-bag.  The case is a hard case with zipper and protects the screen from damage.  A USB cable is supplied for unit charging and data transfer, as well as wall charger for fast charging the unit.  The B1 has a nice 'feel' with a plastic case that is sturdier and more streamlined than the Flytec 5020.  The screen size is twice the size of the 5020 with a resolution of 320X240,  and similar in size to a 6030 - a nice big display.  The four UI buttons are easy to use with gloves and their use is intuitive.  In general the package is well designed and robust.  Noticeably missing from the packaging is a User Manual.  For that, one needs to go online.  This is a reasonable solution since documenting firmware upgrades can be done more efficiently with an online revision to the manual.  More about that later. 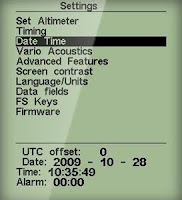 Getting Started -
Out of the box the unit had firmware ver. 1.16 so I went online and found that the latest version was 1.20.  Downloading the Flash program and installing the revised firmware was simple and easy.  I used GPSDump to load the Chelan waypoint file and, 15 minutes after plugging in the USB cable, was ready to aviate.  Setting up the User Defined Fields (UDFs) was simple also.  The list of options available for UDFs is extensive and expanding regularly to meet the requests of pilots.  There are two groups of six UDFs programmable by the pilot, so having 12 UDFs available provides a large amount of visible information.

The Guts -  The B1 Nav uses a 50 channel GPS engine and seems much more reliable than the Flytec GPS system.  The battery is a built-in Lithium-ion battery, charged by a USB cable.  A wall charger is included and will fast-charge the battery.  A connection to any USB port will slow-charge the unit.  Battery life is reported to last over 20 hours.  I prefer to have the ability to swap out batteries (like my 5020) but the versatility of the charging options and battery life makes my bias moot.

Use of the instrument -
This unit has the standard variometer features, which include a definable cadence and frequency.  I chose UDFs that suited the type of flying I was doing - XC competition Race-to-Goal.  Every popular UDF option is available and more are being added with each firmware update.  The screen shown at right is the small vario version of the display, with six UDFs visible.  The display shown in the top graphic is the large vario version with four UDFs.  To switch from one group of UDFs to the other involves the push of one button.

It's obvious that a lot of thought has gone into the programming of this unit.  It has very useful features that other integrated GPS units have failed to provide, while gleaning the best features of the existing units.  As an example, when programming the 5th task of the PWC in Chelan, the Flytec and Garmin units were unable to program the task as assigned.  We all 'worked around' the task parameters to make the task defineable on our various units.  The Flymaster, on the other hand, was able to allow definition of the entry/exit cylinders as assigned - While the top pilots in the world, with the fanciest GPS units made were having fits to define the task.  Chris has been flying in competitions for many years and has developed a suite of very interesting features.

For example:  The Buzzer - The Buzzer is an audible indication that you are not climbing yet, but that you have entered an area of buoyant air that needs exploration.  One thing that I experienced (and it seems universal) was an initial feeling that the unit is way too noisy.  Soon though, after adjusting some of the audio parameters, and a desensitization period, I grew to appreciate the information provided by the various growls and noises emitted from the unit.  The Buzzer is a nice addition when scratching in weak conditions and I found it very helpful.

The Thermal Core Indicator - Initially I doubted the value of this feature.  The B1 Nav looks at the rate-of-climb in 50 meter altitude slices and plots the location of the best lift.  This feature is very helpful in re-centering and staying with lift when climbing in winds and/or inversions.  I actually grew very fond of this feature.  A word of caution though.  Less experienced pilots may become a bit too fixed on this 'dot' and not realize that it only plots the best lift that you have flown through.  It is still necessary to explore the area so as not to miss the real core of the thermal.

Route Optimization - The B1 Nav will plot a 'least distance' course between turnpoint cylinders.  This is of extreme value when tasks are built with large cylinders.  A recent post by Adrian Thomas noted:


"Long floaty glides in the smoke til about 10k from the turnpoint (set to keep us from going over the back of the hills), then long sinky glides to the turnpoint. The flymaster pilots are good to know when trying to find the tangent point on a 5k cylinder, I imagine all the other instrument makers will be upgrading software to optimise routes round big cylinders now."

I do not think the optimization includes wind factors in its calculation, so there is still some room for the pilot to increase the optimization, but this feature is a big help.


Overall Impressions -  The Flymaster B1 Nav is a versatile, powerful, and robust instrument.  The firmware is being revised often to meet the expectations and requests of the users.  The presentation provides plenty of information and has a user interface that is intuitive and easily navigated.  Most importantly, the guy who has driven this project and builds the B1 Nav's back-end brains, is involved.  Christiano participates in dialogs with the pilots who are using his product and revising it to meet our needs.  This is one of the most exciting aspects of being a B1 Nav user.  When a problem is encountered or an idea for a new feature is voiced, we have the ability to participate in the process.  This is how a software driven instrument should evolve.


I asked a local US dealer about service for hardware problems, and he indicated that most hardware service will be handled locally, allowing a quick turn-around.


The pricing of this instrument has allowed many more pilots to consider an instrument of this caliber.  With a retail price below $700US, the B1 Nav is half the price of comparable units.  Don't underestimate this tool, it is made with quality, versatility, and pride.


I got my unit through WWW.FlymasterUSA.com and Jug also takes good care of his customers, providing quick service turnarounds in the US.

Hi Tim from another Tim and a beginner that flies with the B1-Nav.

I can echo all of your points on the instrument. My friend flies with an aging Flytec 5020 and complains at me about the amount of noise my B1-Nav makes. However, I love it and the noises highlight to me that it has erroneously started logging my flight before I've launched which it is sometimes prone to do.

But I love reading reviews by experienced people as it highlights to me just how good this instrument is and how it was such a good choice to purchase it. It'll grow with me as my experience grows. I know that this will be a long term purchase and one that won't be needing changed as I enter the early stages of competitions.

Cristiano helps to create a very personal feel to being a B1-Nav owner. He helps you feel like you're a member of an exclusive club and that you are personally involved with the design and capabilities of the device. The turn-around time for additions is very short and demonstrates clearly, that the developer listens.

So thank you for your review. I can only agree with all your statements.

Hi Ombit -
Thanks for the comment.
It looks like you're having fun & the B1 Nav will increase your XC enjoyment. Fly Safe!

I have been flying with the Flymaster B1 Nav this summer, paraglider and hangglider. The feature showing the core of the thermal is the one I really appreciate. Especially in weak conditions and/or the thermal cores are small.

When conditions were like this, I deliberately left the thermals, and every time I just looked at the spot, which was now out of center, and went straight back to the thermal. I tested this many times and many days, and it worked best in weak conditions. Using a normal vario I guess I would have had some problems finding the weak cores.