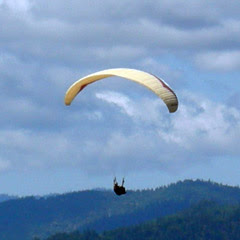 
Today Dave & I woke to cloudy skies & a forcast of wind. We had a nice breakfast & headed over to Rat Race HQ at 10am & did the normal check-in stuff. We saw a few friends from prior years. Larry & Raymond from Springville joined up with us & we all rode to launch in my truck. Low launch was windy at times but launchable & we headed up to main launch. When we got to the top, it was a beautiful day with the Cu's firming up nicely & good periods of light wind to launch - and yet - we were the only pilots at launch. . .We were filled with some doubt, but David & I decided we came to fly. Launch was smooth & lift was ragged & weak at first. We hung out on the main ridge for over 30 minutes until I was able to get a good climb down by the lower launch & decided to see how the trip across to Rabies would go.

I was able to make it to some weak lift & milked it for a while until it bloomed into a nice 400'/min. climb & I drifted over Burnt Ridge while I climbed. I called the guys, who were by now in the valley, & told them I had almost 6000' & was going to head down to Donato (out in the Medford Valley about 12 miles South) A map of the waypoints is HERE

The flight went well with abundant lift & subsequent climbs to 6800' at rates of 800'/min. The total flight was 16 miles or so.

I made a nice landing in the Donato LZ & was met by 'Donato' himself - He's my best friend since he had a cold beer in his hand for me ;-)

A great day with good indicators for the week. I was the only guy I know of that was able to get away today & flew the whole route alone. Looking forward to more miles tomorrow!
Posted by Tim at Saturday, June 16, 2007
Email ThisBlogThis!Share to TwitterShare to FacebookShare to Pinterest
Labels: 2007 Rat Race, competition