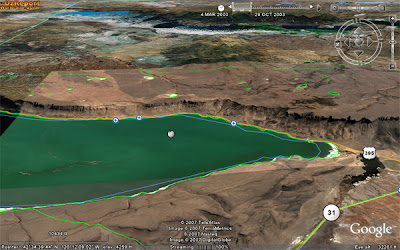 Today the wind was light at launch & Dave & I were ready to fly physically & mentally. A task was set early which had an entry cylinder at the Blackcap LZ & then a 29.5 mile leg to Ennis ridge. The next point was 10 miles down-ridge & Xwind to Simms Junction & then 2 miles to goal. I had a good launch & scudded around launch, low, for a while before I got into the gaggles boating around before the start.

The gaggles today were very orderly. After some rather exciting gaggle flying at the
Rat race last week, it was nice to fly with cooperative proficient pilots. I was a couple minutes late at the start & had to get low to get to the cylinder in a timely manner at all. As I climbed up to 11,500' I had a great view of the valley & of Abert Lake & the amazing Abert Rim. The cliffs are 1600' high & are vertical. I hope we head that way this week.

As I continued North along a low ridge, I was able to fly with other pilots & share the responsibility to find lift. The climbs were topping out at lower & lower altitudes as we continued North to the turnpoint. Looking down, I saw many early dirting of some good wings and good pilots that were racing hard in (what was becoming) marginal conditions. Lift was weak as we approached the waypoint and the valley wind was coming from the Abert lake area. I was with a group of gliders that all were in the desperately-looking-for-lift mode. We would scramble for any shard of lift & if anyone had a bubble & began to turn, the rest would pounce. All this effort only extended our flight a couple of miles towards the last turnpoint before goal. I landed in a wonderful field of freshly mowed hay with 5 other gliders. Fortunately a retrieval van pulled up & I hustled to get in it for the long ride home.

In the van I heard many stories of flights, but I began to realize that my flight was one of the better ones. I knew some of the top guys had flown farther than I had, but most pilots hadn't made the Ennis waypoint.

Dave had a similar flight as I had until he got about 10 miles from Ennis. He got low on the ridge & decided to land on the slope in a clear spot & hike out. He and Meredeth hiked about 6 miles to the road for pickup.

No one made it to goal today so it will be a fully weighted day. I'm very happy with my flying today - I was a bit slow, but that helped me pick my way along the course. It was a day of survival & I seem, recently, to be good at those if I am PATIENT.

My flight is HERE

Results will probably be HERE soon.

geez Dad! sounds like fun. I have been talking a lot about my adventure seeking Dad. I'm proud of you up there.