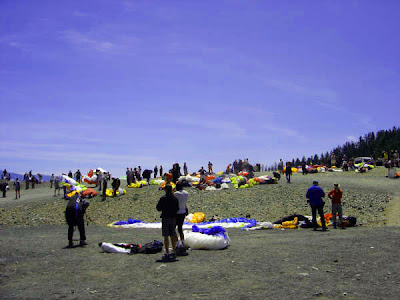 Scores for the day are HERE

Today looked great when we stopped for our ritual breakfast sandwiches at the Pony Espresso in Jacksonville. The weather forecast wasn't so hot though. The valley was inverted to 6000' (which means there wouldn't be any lift below 6000' until the valley warmed to at least 78 deg.F.) In addition, the weather forecast called for afternoon winds to freshen to 20 kts. in the valleys.

The task cmty. called a very optimistic task that was almost identical to the 43 mile task called on day 1 of last year's Rat Race. A long leg up/crosswind to grant's Pass OR, followed by a return to the Jacksonville area & a downwind leg to Donato (where I had flown all-by-myself on Sat. for practice.

As the launch window loomed, none of the wind dummies (free fliers who have volunteered to fly in the area & report lift & turbulence conditions) were able to stay in the air & optimism was waning. The task committee revised the task to "Go to Donato whenever you want & plan on a BBQ party when you get there."

We were free to launch & start whenever we wanted. I had a good launch & waffled around the Rat for 20 minutes. I decided to look for lift over Burnt Ridge but got there fairly low & struggled with rough bumps until I was 100' over the ridge. The thermal released from the hill & shot up through the inversion & carried me, over the next 15 minutes, to 8300' This looked like plenty of altitude to make the turn point at Cemetery, then glide to goal. It was enough, in fact, 2000' more than enough. I had a fairly good time (32 minutes) but could have saved 5-10 minutes by using my head & planning my moves more efficiently.

At goal the mood was mellow. Two kegs had arrived & the party had been in full swing for 30 minutes when I arrived. There were at least 50 pilots in goal & we all were very happy to have flown. The wait at the top of the hill was more than 4 hours & the sun took it's toll on us all.

That's it for now - I need some sleep... Tailwinds to you all & a special wing & a prayer to Bob O'Brien, who went on his own journey yesterday.

Results are out now today's task was devalued greatly, due to it's short time (leaders finished in less than 20 minutes.) My time was :32 minutes. Very few place changes occurred since the point spread was minimal. Now that my Day one score was finally fixed, I'm sitting 62nd & ready for some good weather. Unfortunately, today (Day 4) looks very stable & windy again. We may have a task today, but it won't be a long one - more later.

Hey daddio, looks good! looks like your having a ball! i love you. I miss you a bunch!
<3 nice picture.