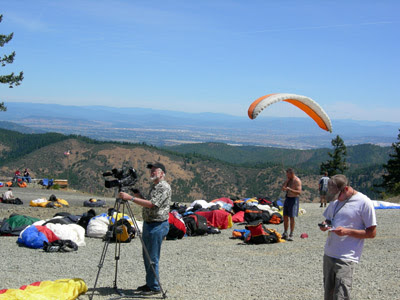 Today was a glorious day with light winds and temps in the high 70's. A task was called that used many waypoints in the valley so that those who were not familiar could get acquainted. The task was a short one at 19.9 miles, but covered a lot of territory & would cross a few areas of convergence where the valley winds collide to create lift, sink, and sometimes, some very exciting turbulence.

I had a reasonable start & cautiously worked around the course. There were down cycles that were giving many pilots fits down low. I was able through sheer luck to get high today & stay high. I don't think I got below 4000' all day. This allowed me to get through the first 6 way points in good time, I was only about 15-20 minutes behind the lead gaggle when I found a boomer over Woodrat that took me to 7000' & it looked like I would make goal. I looked around for some other pilots to work with on the 10 mile glide to goal - there were none. All the gliders were either ahead of me (low) or behind me (also low). I didn't really want to commit to a solo run into the narrow valley that the goal sat in since I had no idea where the lift would be working. As it turns out, 5 miles later, I found myself in need of just one more thermal without any other wings to help me find the much needed lift.

Gravity won this one - I landed in a farmers field a bit less than 5 miles from goal. It was a good day to fly - the thermals were strong although rough at times & the convergence areas were fairly consistent in position and character.

I feel like my pacing was good today. I was able to work around the course without the need to pull out a low save (My usual MO). I also was ahead of many pilots when I began my final leg to The goal. If I'd been with one or two other pilots & we had worked together, odds are good that the outcome could have been better. I'm not sure if loitering & waiting for wings below/behind me would have been smarter... I'm not sure I'd have been able to make myself do that. Obviously the choice I made didn't get me to goal. Many pilots behind me DID complete the task, so waiting for them was an viable option.

Good launch - good landing - big smile (bigger when I make goal) and a beer before bed... not a bad first day.

Scores will be posted HERE soon.

i love your new profile picture, Dad. I hope you had a good father's day. love you