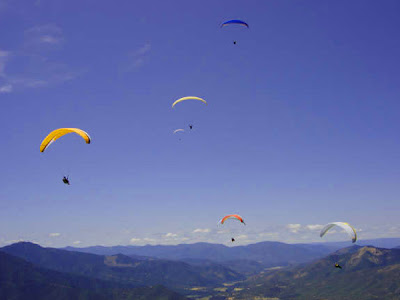 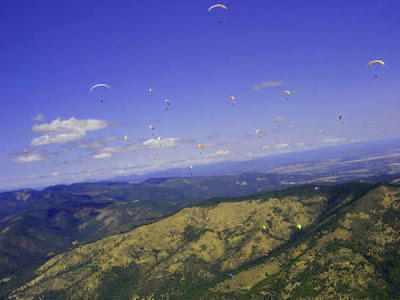 Only two more days. That's what Dave & I were thinking about, on our way to breakfast. Today's task would be the last long one since Saturday, after the awards, everyone going to Lakeview will be heading out for a three hour drive. The weather looked great at launch with cumulus popping in 3 quadrants. The forecast was for winds similar to those that cause the cancellation of yesterday's task.

I really wanted to fly far today and the weather looked like it might allow it. We held a hurry-up pilot's mtg. with the task announced - a 24 mile jaunt across the valley to Rabies - then a run to the Medford Valley with a couple tricky transitions upwind. Then a run to Donato.

I got in line to launch early. When it was my turn, I realized my risers were twisted. I had unhooked to refold my wing the night before & had hooked in wrong - a rookie mistake that cost me time. I wasn't going to compound the error by rushing the setup after fixing the problem, so I lost 15 minutes.

After a routine high wind launch, I worked many weak over-occupied thermals. Many times I left working lift to find less crowded conditions. When I found lift & began to climb, the gaggle would follow & claw for space in the thermal like piranha devouring their prey. I had a decent start & tanked up on altitude at Woodrat Launch. Many pilots tried to glide to Rabies (the next waypoint) only to get drilled as they entered the lee of the ridge. I held back & waited to see if anyone would find lift. Many pilots were landing in the LZ but some were beginning to circle low & it looked like I might be able to scramble back up, if I tried to tag Rabies. I glided to Rabies & was encouraged by decreased sink in a nice lift line along the convergence. When I was 1 mile from the turn point cylinder, I encountered some serious sink that threatened to end my flying day by putting me on the ground. I was .25 miles from the point when I decided I'd had enough sink & turned out (on a different line) to try to salvage the day.


I was watching the LZ below & noticed pilots landing while drifting backwards. The LZ winds were 15 with gusts to 25. Try as I might to avoid the LZ, I landed there & enjoyed the approach & landing.

Dave was also hanging back - but he deserves the prize for most persistence & fortitude in attempting, for better than 2 hours, to reach Rabies against a growing headwind.

Needless to say, I'd have rather made goal. I'm a pragmatist though. Let's just say I'm happy that I had no scares & no regrets in the strenuous conditions. A few other pilots ended in trees & stuck places that required herculean efforts to extricate themselves from harm's way...

There was good company in the LZ. Some sunk out (as I did) some got drilled & then had to deal with rotor that gave them fits, & others just didn't like the conditions.

I think I got a bit more mileage than those that sunk out early, but there were thirty in goal - they deserve every point - it was a tough day.

Larry did about the same mileage as I today but crossed the start 7 seconds early due to a GPS clock problem, so got minimum points. Thanks to Larry for these photos.

I just looked at the RESULTS. So far I'm 6th in the Master's Class & 15th in the Serial class. I'm proud of these standings since this is quality competition.