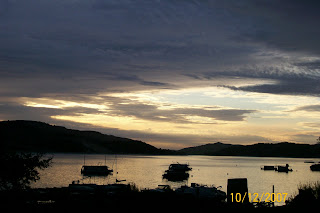 I was able to attend an SIV course at Lake San Antonio this weekend. The 3-day class was run by Eagle Paragliding (Rob Sporrer) and featured Brad Gunnicio on the microphone.

Friday started well & 9 students and a crew of 4 headed over to the SE shore of the lake at around 8 AM. We setup a day-camp & got organized. We each introduced ourselves & listed our goals for the weekend. Mine were:

1. Go through the collapse series on the Aspen2, emphasis on accelerated collapses. 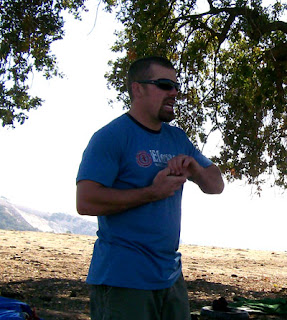 I was first in the line-up. Although cloudy, the rain looked like it might stay South of us. Cloudbase looked high enough to get some basic maneuvers in. I suited up in cold wx gear & made ready for the tow. Due to a South wind, we were launching on a tangent to the shore so my time over the beach was longer than the standard pattern (fortunately). Launch went well & soon I was at 100’, just about to cross the beach & fly over the water when Rob came on the mike, “Pin off ! Pin-off! ” I released & turned crosswind to land near our camp. Apparently, one of the drive belts to the hydraulics had slipped & filled the boat with smoke. I’m glad I stayed dry, ‘cause it was maybe 40F. outside. The rain moved in shortly thereafter so we piled into the boat & went to a cabin for lunch & a brief by Brad. The day was over & I had the highest tow of the day ;-) Jim Wells from SLOSA was also at the course.

Saturday I was first up again & we towed as high as the cloud overcast would allow. I did the collapses & basic maneuvers (B-line stalls, horseshoe etc.) that Brad asked for. The first tow or two Brad is building trust – I listened & carefully did what Brad said to do WHEN he said to do it. This way he knew that if I did more advanced maneuvers & got balled up, I would still comply with his instructions. We all got to do the basics & 90 minutes later it was my turn again. Launch went well & I was soon 2000’ above the lake & upwind of the camp a mile or so. Suddenly the tension on the line went away & I realized that I was not attached to the boat any more. First order of business, steer the jet. I headed towards the camp & glide looked good. Next, I pulled in the line until the drogue chute was in my lap & pinned it under my leg. I could now see the line all the way to the water & realized that the lower I got, the more drag the line would have. I was just digesting this info when Brad said to do what I was working towards, “Disconnect the tow hitch in case the line snags on anything.” Good call, Brad. Then I planned my flight path so I didn’t overfly any trees or boats & flew downwind of the camp, dumped the drogue from about 150’ above the beach & landed back in front of the launch. Kind of a fun exercise!

A splice had let loose & soon the boys had it repaired & we were back in business. I got the next tow (since I hadn’t done any maneuvers) and was soon spiraling and collapsing again. It was great to be able to screw the wing up & get it back into shape without any concern of impact with the ground. Brad was great at encouraging & coaching. He kept it up all day long without losing his sense of humor or attention.

I drove home Sat. night with a sense of excitement – Tomorrow I get to do full stalls & SATs.

Sunday the weather at the lake was a thin layer of fog. It started to break up, so Brad went up for a couple quick tows & did an airshow for us. I caught one of his landings –

At this point we had a couple of mechanical issues that really slowed the day down. Rob & the crew did their best to get things going again. After 90 minutes we resumed towing. My first tow was very high & allowed me to do 5 full stalls. I was anticipating a much more dynamic reaction from the wing. The entry & recovery were both benign compared to my expectations.

On my last flight we were able to do 4 SAT entries & a few spirals. The SAT entry was not very hard technically, but was harder to do physically than I expected. The pull to initiate the maneuver required a wrap and I found the pull on the brake line to be more tension around my hand than I liked – in fact, I still have a numb pinky. The successive SATs really scrambled my brains. After rolling out of the last SAT, Brad wanted me to enter a spiral. I was so dizzy that I just ignored him for a few seconds to get my bearings & breath back. When he says on the video, "you're probably dizzy as hell. . ." he was so right. Then I entered some of my best & most dynamic asymmetric spirals. I was able to get way over the wing & felt the timing when it was working. The Aspen 2 really has a lot of energy & SATs very well too.

Brad’s debriefs were very helpful & I’m sure that as I rerun the maneuvers in my head, I’ll learn much more. I’m looking forward to working with Rob Sporrer & Brad again.

My wife Mary also had an ‘active’ weekend while I was at the lake. She ran the City to the Sea Half Marathon & set a personal best of 1:55. She placed 6th in her age bracket!