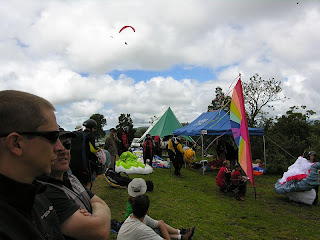 Today was a dry day compared to the previous two. The son was bright at dawn. We headed to coffee with James Ryrie, his daughter (and our retrieval driver) Hanna, James Thompson (the local expert)and his friend from Connecticut, LeAnne, Dave & me. Today looked like it might be big. Both Dave & I were ready for a good day of flying - neither of us felt very competent dealing with the weather & local topography. Today we hoped to accomplish a nice task. 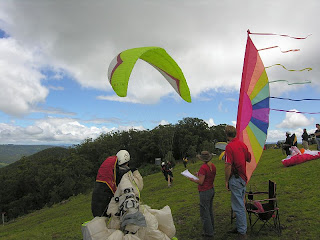 The pilot meeting announced the leaders. Viv Williams, launching here, leads the women's and Phil Hystek leads the overall. My bad flight yesterday lowered me to 4th in the DHV2 cat & 39th overall.

At the top of the hill the feeling was one of anticipation. We all knew the day would be good. The wind would be a factor - so would the blue areas. The task was called early & long. A 139k (86 mile) downwind run. Dave & I decided to launch from the East launch again & launched fairly early. Most of those pilots who had launched were getting up so we hucked off. Right away we sunk to below ridge height, but we had lots of company so I wasn't worried. Soon the traffic was concentrated into such a small part of the ridge that there was a bit of jostling & yelling as we all struggled to stay in the air. After a protracted battle, Dave & I headed for the bombout. Our first bombout & relaunch. Our retrieval worked out great & we were on top with plenty of time to make a good start.

Relaunch into the now very brisk wind at launch was exciting but fine and we were soon high over launch Dave just 50' above in the same thermal. We headed over the back & soon found some lift that consolidated into a 2-3mps climb. At this point I lucked into a good line along a weak convergence & Dave, to my right about 100 meters, was in a lot of sink. By the time I found my next thermal at 1000'agl or so, Dave was struggling a few hundred ft. above the field. He had a great save & I headed out when I hit the 6500' altitude limit in protected airspace along the route.

Dave was far behind but fighting a good fight. I lost him when I began to get busy. I was working every bit of lift I encountered. The lowerI got, the stronger the wind seemed to get. I was circling in zero sink at times & drifting towards goal at 20-25 kilometers/hr.

By now James & James had landed & were watching Dave & I fly beyond there landing spots. Retrieval would be easy today. Dave had gotten up and caught me. I saw him just before I landed, he was 400meters (1/4 mile) closer to goal than I.

Today was pure fun. We had some good climbs and flew over beautiful country. We covered 25-30 miles today too. Rumor has it that there were 8-12 in goal.

Thanks to Brett Hardin for the photos of Day two.

Tim
Posted by Tim at Monday, January 28, 2008
Email ThisBlogThis!Share to TwitterShare to FacebookShare to Pinterest