I’ve had a month between the West Coast Paragliding Championships and the upcoming Chelan XC Open to reflect on my quest to improve my performance and competition results this season. I haven’t had a chance to fly (due to my work schedule and the adverse local weather/fires) so I’ve taken the opportunity to tweak my gear and work on my ‘brainage’.

The gear tweaks consisted of some fine tuning of the speed system – I replaced my speed system line with 4mm tech-cord and eliminated the exit grommet from the system. I simply put a slit in the neoprene to allow the cord to exit the harness fairing without rubbing on the abrasive edge of the grommet. This seems to eliminate the ‘skinning’ problem I encountered at the WCPC which required twice replacing the speed system cordage during the comp. 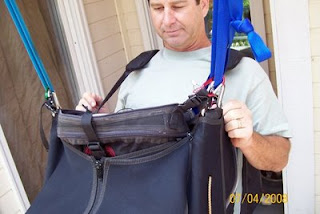 I also modified my cockpit by relocating and changing the geometry of the hang straps and redesigning the flap hold-down system. I use a strap running around the waist strap and bag to give the cockpit some stability when yankin’ & bankin’.

WRT working on my brainage. . . I can’t understate the importance of proper mental attitude & preparation for a comp. Just as the mental variable can improve the chance of survival in a “defining moment” in one’s life (read Lawrence Gonzales’ book “Deep Survival: Who Lives, Who Dies, and Why”) so can one’s outlook affect his performance.

We make many decisions each minute during a task. We are evaluating the air, position of other competitors, maximizing climbs, altering our speed in transitions, etc. Each of these variables can affect the outcome of the flight. At any one moment, we are 15 minutes and 100 or so decisions away from a landing. Gravity is our insistent and relentless constant. We have to beat (or at least delay our submission to) gravity while using it to propel us along our route to get to goal.

I’ve been rereading “The Secrets of Champions” by Dennis Pagen with a new perspective. Some gems from the best:

"It should be made clear that if a pilot is afraid, overexcited, pushing too hard, or thinking too much – anything that prevents relaxation – he or she will not be able to learn how to get the ‘picture.’ So the first rule in becoming an excellent thermal pilot is to mentally relax.

I believe pilots should be in competition, and flying in general, for the long run. Being overly aggressive usually burns you out if it doesn’t injure you or worse.

It’s important to remember (that) we fly for fun, and pushing past the safety margins for a chance to win is not my idea of fun."

Of course I’ve also read a lot of how-to in this great book.

Next stop is Chelan, WA to fly the Chelan XC Open in late July to do some flatland flying. I hope that my experiences in Killarney back in January will help me adapt to this foreign flying venue.