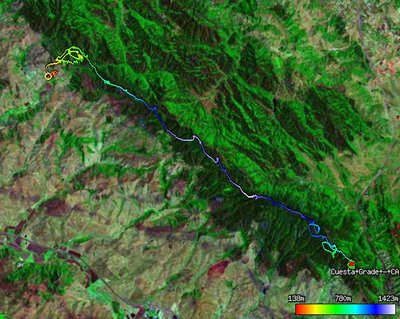 Today was a spectacular day in the San Luis Obispo area. I awoke with my usual "got in from Hong Kong yesterday funk," but shook it off when the forecast looked good for the Grade. The emails flew back and forth and it looked like a good weekday group would be at the hill around 12.

After taking my dogs to the vet I hustled up the hill & was first to set up while marveling at how green things had gotten since last week. Patrick and Kevin soon joined me and prepared to fly. Patrick was first to lay out and that meant that there was an immediate lull for 10 minutes. The cumulus clouds were really starting to look good, with a nice cloud-street West all the way (it looked) to Cayucos and many more popping East of launch. Patrick passed up a couple decent cycles and I was getting antsy, so I opted to launch first. I launched at 12:30 and played with some scattered lift but soon was maybe 30-50 meters below launch wishing I had been more patient. I eventually found a nice bubble in the usual spot that bloomed into a nice climb back to the ridge and then to the towers. As I headed West, over launch, I could hear/see a blimp flying along 101 and crossing the grade towards SLO. He was maybe 300 meters below me and a mile away - it was hard not to head over to fly by him ;-)

Patrick soon launched as did Dave, Kevin and Jack. When I passed the towers I was over 1000 meters and things looked text book for a fun XC flight towards Cayucos. I was showing a S flow that veered into an Easterly flow at around 1200-1400 meters, so I opted to continue along the ridge Westbound. The cloud street was the nicest I'd flown in this area. Patrick was getting nice & high and looked like he might head East but turned back West to shadow me along the ridge. The best lift band seemed to lay just W of the ridge. The thermals were regularly spaced and reasonably smooth. 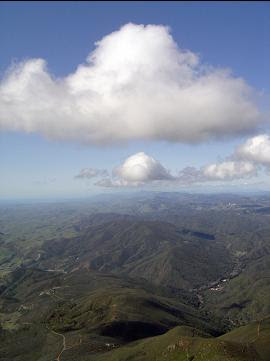 I wasn't pushing hard because I really wanted Patrick to catch me but just flew a reasonable pace. Occasionally I'd see a couple hawks above me and circle with them to 1000+ meters. Approaching the 41 corridor I notice that a blue hole was lying over the pass and optimistically (too optimistically as it turned out) continued into the blue at a mid altitude. Soon I was calling back to Pat that he needed to tank up before his transition. I cruised across 41 at the point the big power lines cross the hwy at a meager altitude. After a low save, I was joined by Patrick and we skated around in a 150 meter band of lift for 15 min. until I was out of steam. We both landed in the same field next to Hwy 41.

We had no cell svc so we hiked a bit until we found a turnout and set up for the hitch to Cuesta. After tying on my PILOT NEEDS RIDE sign and thumbing for 10 minutes, a nice gentleman offered to give us a ride to the top of the grade. We piled in and soon we were at the base of the dirt road hiking to launch.

It was one of the prettiest days I've flown at Cuesta. Unfortunately my thick gloves (which were VERY helpful at altitude) caused some fumbling with my helmet cam, so I was unable to turn it on.

Thanks to Patrick for taking the photos and making the flight a joint effort.