Today looked very good when we arrived at launch but the forecast was calling for local Over Development, in the Ruch area, much earlier than on previous days. The cu's were popping in all quadrants with the closest (and biggest) to the South of launch. 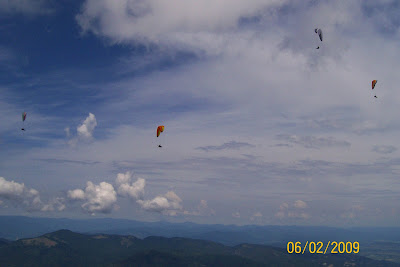 A 43Km task was called from Woodrat Peak (2K Exit) 27 Km. to Grants the a 11Km leg to Billys and back North West 5Km to Aplinn with goal at the winery. 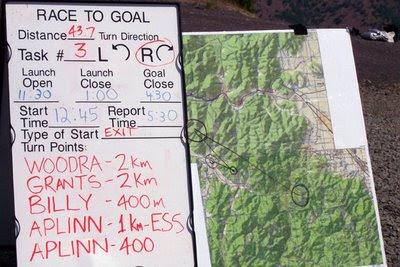 Launch was a bit slow due to very light, shifty winds on the hill, but we all made it off with plenty of time to get in the air prior to the start. I found good lift to cloudbase. Base was ragged with lift often allowing climbs higher than base, in the clear air. 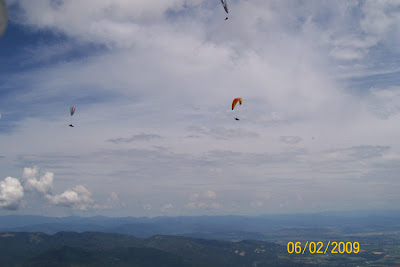 I was right where I wanted to be for the start - about 2 minutes behind and high. This allowed me to view the sky and pick the most efficient line across to Rabies. A mild convergence was setting up and allowed me to get to Rabies high enough to go into a good search pattern. I was able to hang on the ridge for quite a while. During this time the skies over Woodrat blew up and began to look very ominous. I also was noticing that the cu's along the courseline were beginning to get very tall. 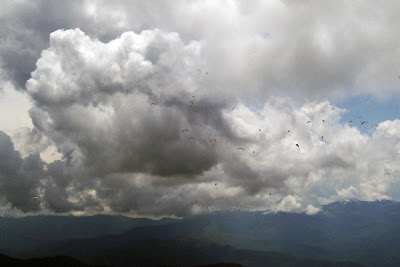 I wasn't in any immediate peril, so I continued my (somewhat personal) battle with a particularly nasty, and one-sided thermal - trying in vain to extract a couple complete circles in lift.

I finally threw in the towel when I figured we had 45 minutes or so of safe flying before the wind was going to blow. I headed for the Longsword Winery and landed with a few other pilots relieved to be watching the weather from the ground. 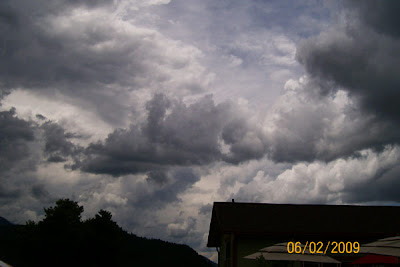 Soon the overdevelopment was undeniable and the meet director called the day. The wind picked up and rain began to fall EXACTLY 46 minutes after I decided to can it. 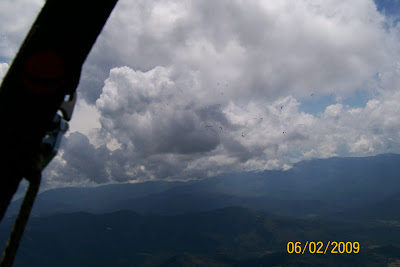 Tonight we have a Mexican food dinner planned. The rest of the week's weather looks like a balancing act between flying in great unstable air and avoiding over development.

Tim
Posted by Tim at Tuesday, June 02, 2009
Email ThisBlogThis!Share to TwitterShare to FacebookShare to Pinterest

Nice pics Tim. I have some from launch. I am back in Seattle now after driving home last night. Weather and Tent not being too kind down there this week! Thanks for letting me use your video..posted it on my blog http://frewsy.blogspot.com Hope the weather picks up for you guys! Will be back for Rat Race!

Hey Tim thanks for blogging so I can keep up with things on the home front.... We also took the day off today due to jet stream coming in over SW Turkey and ramping up the winds big time. I was more than ready for a day off, as were most pilots here...Should pass quickly though and we might be back in business tomorrow
Jack