Click on photos to view the images at full size. 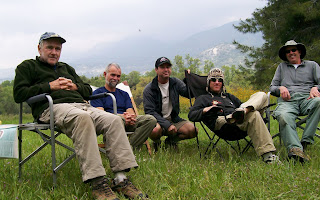 L to R, Dave, Bruce, Tim, Patrick, Mike
with a hazy launch in the backgroundThis week 4 of us from the San Luis Obispo area headed to Dunlap to fly. We arrived Wed., around noon, and set up camp at the Dunlap Flight Park (Dan's Place). Greg made us feel welcome and offered to drive us to launch.  The weather was classic Spring cu's with cloudbase around 4500-5000'. 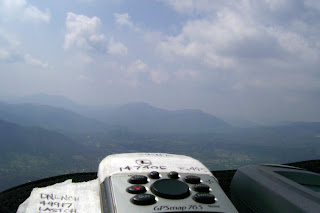 Mike was new to the site, so Patrick gave him a site- brief while David and I set up.  I launched first and went to cloudbase almost immediately.  The rest of the crew launched and we all enjoyed the buoyant conditions.  I headed across to Granny's knob and then got snookered coming back to the main ridge.  I landed at the base of the ridge.  By then everybody but Patrick was on the ground and Patrick had come over to land, so I suggested we go back up for another flight. 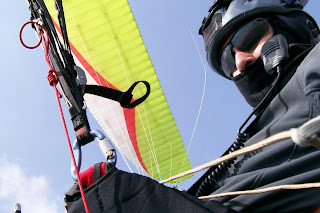 The second flight was nice.  Conditions had mellowed and cloudbase had gone up to 6000'.  I headed over to Hill 49917 and explored the various cores over the peaks to find the bullet that, eventually, took me to cloudbase.  Then I headed for Bald Mountain and flew all the way to the West face to extract as much lift as possible there before heading for Dan's.  I didn't realize the amount of altitude that I had expected over Bald, so it was a bit 'iffy' whether I would make the final glide to Dan's (about 8K) without a little more lift.  I milked everything I could out of the glide, but still was planning a landing behind the restaurant, when I found a 100'min bubble.  I circled about 15 times in the fickle lift, while drifting downwind, and this allowed a nice approach to the main LZ at Dan's.  Mike had a beer for me and soon we were gathered around the BBQ telling tales.

Thursday we headed to another site to fly with Tom M. It's a site with limited access, so let's just call it no-name. The launch was a very intimidating granite dome that tailed off into a 1000' vertical face.  There were two primary spots to launch.  One had more space to turn and run at the cliff - but it had a 5' by 5'tall tree to negotiate at the lip.  I chose a rather tighter spot with about 6' of granite between me and the cliff while pulling up.  I launched first and the pull up and turn went well, I had good pressure in the wing and took two steps into the void.  I had an immediate good climb to the low cloudbase (about 400' over launch) but got flushed in a down cycle and, after a 15 minute scratchfest, landed in a tight meadow at the base of the hill.  Dave and Patrick and Tom all launched shortly thereafter, into a nice sunny period and made it Northwest along the ridge, and landed in big fields out there.  It was an enjoyable day and fun to explore a new launch site. 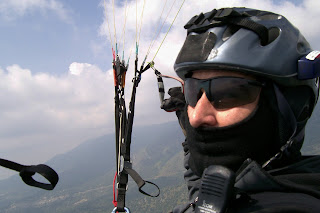 Friday we awoke to scattered clouds and a nice forecast of clear skies. XC skies gave no hints of high humidities and overdevelopment.  Bruce B. had joined the party Thursday night and Mike, Patrick, and Bruce all headed up to launch to get an early flight while Dave & I broke down the pop-up trailer.  Unfortunately the entire Dunlap valley filled with convective cloud and base was 100' below launch.  The boys headed back down to camp and decided, after a time, to head home.  At around 1:30, Dave and I got a ride with Greg to the top and conditions were just beginning to improve with nice blue gaps between the healthy cu's.  We set up and launched to fly with the thermal-birds (swallows) in the improving conditions.  Eventually we both had had enough fun & knew we had a drive ahead of us, so we landed at Dan's and headed home.

In all it was a great three days.  No epic flights, but nice company, enjoyable times, and many safe landings.
Tailwinds,
Tim
Posted by Tim at Saturday, April 17, 2010
Email ThisBlogThis!Share to TwitterShare to FacebookShare to Pinterest
Labels: Dunlap, Dunlap Paragliding, SLOSA