The morning was very cold today and forecasts indicated it would be in the 20'sF at cloudbase, so we all wore our best insulation.  We met at the top of the hill at 10AM and a pilot meeting took place in the restaurant shortly thereafter.   Overdevelopment was predicted and a short task was called to   Galena Lodge, 31K North of  launch. 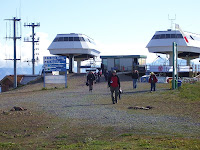 The cloudbase at this point was fairly low and we all headed for the launch area to prepare for the task and get our gear in order.   Conditions were not conducive to launch so the window was postponed in short increments for 90 minutes before the meet director cancelled the task.  We were seeing some overdevelopment  and precipitation and there was concern that we would be threading the needle to call the launch and start,  while allowing sufficient time to fly the task in rapidly developing conditions. 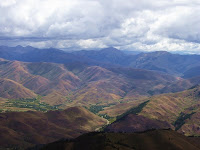 After the task had been cancelled, a few set-up and launched into fickle conditions that included light ice-pellets and back-wind launches. For an interesting view of the day's progression, you can view a time-lapse of Bald Mt. weather as we set-up and eventually head down the hill HERE. Select the Lookout detailed video for the best look at the sky's progression.

Tomorrow is still looking taskable so we will be at the top at 10am again.