I must admit, I'm a bit biased against Powered Paraglider pilots. . . Most of the ones I've met have been, well, a bit, um . . . odd.  They are the recumbent bike riders of paragliding.  A few of them have insisted on the title, "Captain" or "Super-(insert-name)" and generally, they have not impressed me with their flying judgement nor people skills.  But that bias aside, I'm betting you'll wonder what this guy was thinking - especially his choice of flying attire.

From the Buenos Aires Herald:

A man was arrested in Puerto Madero this morning, after having managed to paraglide around the city centre for a number of minutes, attracting the attention those pacing the streets, Naval Command officials reported (PNA).
A spokesman for the PNA said that “around 9AM this morning a man landed after paragliding and was swiftly arrested by PNA agents.” 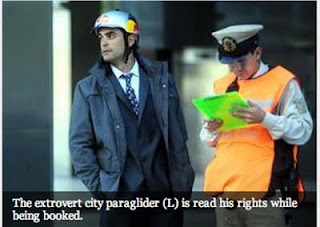 “The paraglider managed to fly for a fair few minutes around the centre of Buenos Aires, including over 9 de Julio avenue, Teatro Colón, San Telmo and finally landing in Puerto Madero,” the source added.
Hernán Pitocco, the sportsman in question, said in an interview that he took off from Venezuela and Belgrano streets where there is a little park. He mentioned that the “glider isn’t regulated,” and furthered that, “at no point was I endangering the lives of others.”

I've spent quite a bit of time walking the Avenues of BA and wonder what this guy was thinking.  There is very little open space in that city and LOTS of wires, but he managed to find a way to get in the air and back down.  Maybe he's a dapper lawyer whose car wouldn't start that morning, so he decided to take the ole' Powered PG to work.


Apparently Hernan is a skilled acro pilot who was participating in some kind of Red Bull 'event' over the city.  Here is some video of his short flight - I think I can see why the authorities were concerned.  No matter how you present it, this isn't good for our sport.  The problem with PPG is that they can exhibit their stupidities over large metro areas, over crowded beaches, or over events, souring the taste of the sport to many, in one flight.

Here's a video of his takeoff:  According to Ad Age, Red Bull was filming an ad where a businessman was stuck in traffic and decided to fly above the traffic - after all, "Red Bull Gives You Wings."
Bad use of judgement by the Red Bull Producers in my opinion.  How do you feel about this abuse of the "publicity machine"?
Y'all fly safe out there.
Tim
Posted by Tim at Wednesday, April 27, 2011
Email ThisBlogThis!Share to TwitterShare to FacebookShare to Pinterest
Labels: Buenos Aires, Oddball, PPG

For an example of the RedBull promoters: