The skies were overcast, the hills were obscured, and the temperatures were chilly when we awoke this morning. All the forecasts were indicating an improvement could be expected so the collective headed up the hill. As forecast the day was a good Woodrat day with convergences to be exploited and winds to contend with.

The task committee called an task that had the race group start at Mt. Isabella and then to just past Squires to Burnt - repeat. . . 4 times. The sprint group also did some similar laps. The task made for some amazing views to the spectators at Longsword Winery which served as goal for both races. I had a good start, getting high above Rabies Pk. and making the first turnpoint at Buncom in good time. The rest of the flight was enjoyable, but uninteresting because I took myself out of the race to fly without the distraction and hazards of flying with the extremely packed gaggles in the valley. The pilots that flew the course had good flights and some very exciting racing. 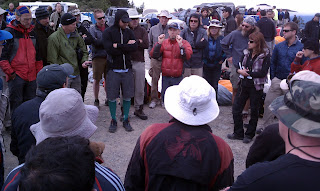 One of the great features of the Rat Race is the generous mentoring going on during the days and evenings. Nick Greece held daily impromptu Q&A sessions on the hill and the group grew from 6-8 a few days ago to 20-30 today.  Shown is Eric Reed offering some hints.

Another amazing feature of the Rat Race is the number of helpful volunteers at the race.  Without these folks the race just wouldn't work.

I found a glass of wine and a good seat at Longsword for the race finish and watched as Dean Stratton won the day followed by Josh Cohn, Matt (farmer) Beechinor, Nick Greece, and Nate Scales.

A live news feed on Channel 10 in Medford for the 6PM news was broadcast from the launch and is available at http://www.ktvl.com/

Tim
Posted by Tim at Friday, June 24, 2011
Email ThisBlogThis!Share to TwitterShare to FacebookShare to Pinterest