Over the Back at Cuesta 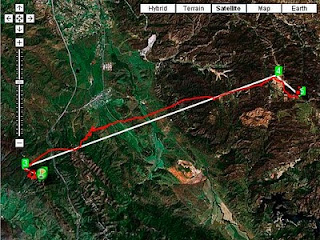 Today was one of the best looking days in San Luis Obispo Co. for XC in a long time.  Patrick pinged me early and we decided it would be an early day so we met at 10AM at launch.  Cumulus clouds were popping in all quadrants and the cycles were causing regular gusts up the face.

We hurriedly set up our gear and were ready to launch by 10:30.  My goal was to take advantage of the Westerly flow and make a downwind dash to Mike's place (about 20 miles East) and then reassess and continue to reach  I-5, if possible.  I had not made the crossing to the range East of Santa Margarita, so this would be fun and new. 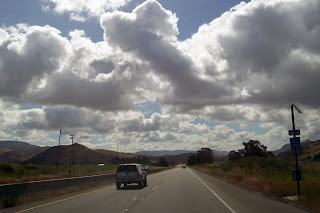 I launched first and scratched a bit, before contacting a ripper that took me right to cloudbase at 5000'. Patrick was working up also so I headed over the back to the East side of 101, where I expected to catch another thermal under the building clouds. All I found was trashy sink and soon found myself landing at the small airport near town. Patrick came over & also dirted after only a few miles. Jack was kind enough to drive over and pick us up so we could give it another go. 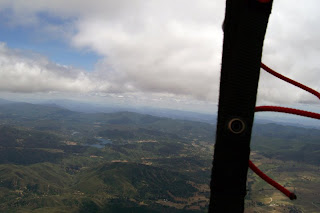 The wind had come up quite a bit in the interim, so neither Patrick nor I were planning to go XC the second time, but when Jack called to say he'd decided not to launch in the freshening wind, and would drive retrieve, I was ready to head over. This time the cloudbase at launch was over 5300' and when I got the second climb in trashy air in the lee of the East ridge, it was 6-700'/min. to 5800' cloud base.  Unfortunately, as I headed East at over 40 mph groundspeed (that's bookin' for my PG) it became apparent that the ground was shaded and the wind, that was adding to our groundspeed, was also breaking up the lift. The landing options are so much better than I had expected while driving through the area and the route is not as intimidating as I had previously thought. I expect to go this way with more success in the future.  It was a fun flight for a short 13 miler, but it really got Patrick and I thinking about the possibilities of the route. 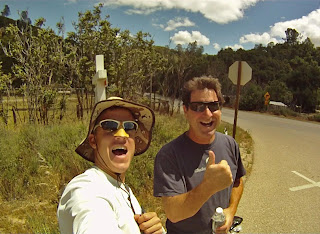 I landed in brisk wind just off of Parkhill rd. (like Patrick, I thought it might be 58)   It was a short 13 mile flight but lots of fun for Patrick & me.  One more thermal and Mike's place was easily possible, two more and we'd have been smoking to Bfield ;-)

I snagged a ride, with a nice local guy named Scott, for the 5 miles to Hwy 58 and we picked Patrick up on the way.  Jack soon picked us up on the Hwy.  Thanks for the time behind the wheel Jack - we really appreciated it.

My flight can be viewed here http://www.paraglidingforum.com/leonardo/flight/332527 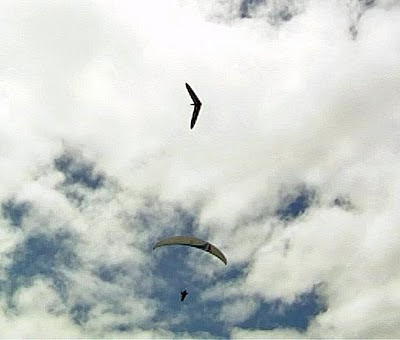 Me on the Avax XC2 flying with John H. Photo by Patrick Eaves