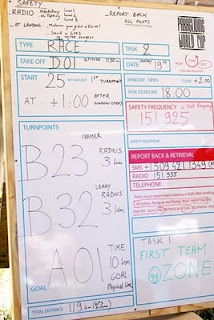 The weather today was well suited for the 119K triangle task.  This task was the final task of the 2008 XC Open and gave many pilots fits on their final glides into goal.  Today was no different -

The task was from Launch to Farmer to Leahy and back to land at the soccer field LZ.  The winds were generally light and, although a consideration in choosing a line, not too much problem - especially if you stayed high.  Climbs were strong and tops were around 11,000' with some cloud. 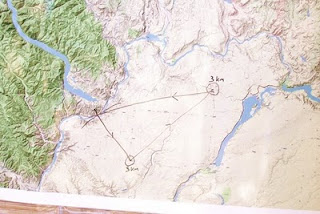 The pace was fast from the start but I had a weak start - a bit late and just low enough to automatically put me one climb behind from the beginning.  I pushed things a bit, trying to make headway on the leg to Farmer.  As usual, I got one of the best climbs of the day over the silos at Farmer and felt reinvigorated as I climbed above 10,000'.  The slog to Leahy was a bit slow as we searched for a good climb before heading into the (usually) sinky area around Leahy.  Today there were actually climbs near the 3k cylinder and soon we were on our way to goal.  I say 'we' because I flew with a lot of people today.  I only occasionally really felt like I was working with anyone and they with me - that meant it was slow going. . . 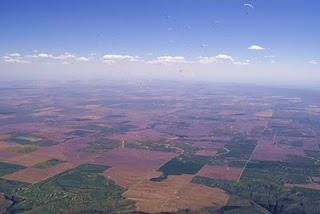 The photo shows what it looks like when you are behind, on a Serial class wing, in a PWC event.  I knew there would be some drama for those who pushed this course too hard, so I just flew my race and tried to make good decisions.  Unfortunately, I got tired and started doing dumb things.  My "final" glide into goal, for example, was started three different times and I still needed an epic effort to get to the goal field after making the ESS at 10K from goal. 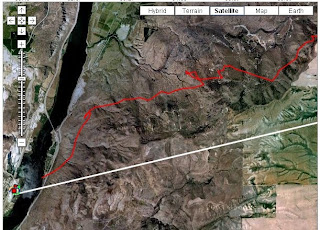 Here's a piece of my track that shows my ridge soaring the last 3 miles to goal.  It was not the most relaxing 20 minutes of my flight.  I landed straight-in and cleared the finish line by 10 feet. . .


I've made goal 2 for 2 now and am very happy with my standing (unofficially) among the other Serial class wings here - Omega 8, GTO, Mantras etc.  Yesterday I was first among the serial class and today, I believe I was 3rd on my Gradient Avax XC3.
Results are out and I'm holding 43rd overall and 1st in Serial (unofficially).