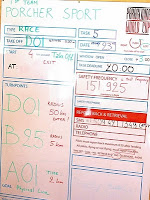 The task today was simple, cross a 4k exit cylinder around the Butte, fly out to the East 50K and then return to cross a 3k cylinder around the Butte, fly to Gonam Pk then to the Soccerfield.  It is conceptually an easy task to visualize and fly, but it gave fits to some who couldn't figure out a way to program it into the computerized GPSs that we use to navigate.  I had three GPSs on board today, my trusty Garmin 76S and my Flytec 5020, and a new Flymaster B1 NAV.  The Flymaster was the only GPS that allowed the task to be programmed directly.  The others I just set reference points and used their indications to provide range information for the turn back to Chelan Butte.

I launched early and flew for an hour or so before the start.  The lift was weak and fickle.  At times there were 80-90 pilots all between 5500 and 7000' roaming around for any lift.  When one wing began a turn the collective would gravitate towards the area crowding into one big massive (and unproductive) rotating swarm of frustrated pilots.  To make it even more fun, every once in a while there was a pocket of particularly snotty air to put somebody into a rockin' & rollin' recovery among the throng of gliders trying to avoid him.  Eventually I got high and boated around with 10 minutes to the start.  I found a nice core and racked it up in the tight thermal for a few hundred feet, all by myself and before everyone attacked my thermal, I rolled out in perfect position for a nice run at the start cylinder.

A North to North West wind was forecast and lower climbs than on previous tasks, so we all headed slightly North of course line.  I was doing OK for the first few thermals, but started noticing that pilots who allowed themselves to get below 3000' AGL were struggling to find and get up in thermals.  I changed gears a bit and used the 300-400'/min. climbs to get me to 6000' or so before moving on.  Eventually I was working with a couple of Swing Stratus' a U4 and a Boom 7.  We made the 50k radius and I turned for Mansfield on the way back.  The NW wind at altitude had picked up and it was slow going to head West.  I worked the best lift I could to minimize drift and maximize speed, but the lift seemed to be spotty South East of Mansfield.  At one point I led out and must have gotten distracted while eating my energy bar, because when I looked back, the guys were going up and too far away for me to reliably get to their spot.  I drove on with the hope that I would also stumble onto lift, but it didn't materialize.  I landed South of Mansfield and had a retrieve in about 15 minutes.

The guys who were in the lead gaggle and second gaggle did a great job of getting back to the rim, but their struggles weren't over yet - The Butte was in shadow and not working very well at all.  About one half of the wings who made it to the rim ended their day without reaching Gonam Pk.

This task may be giving the scoring software some fits, like it did our instruments.  Xavier is French and has a distinctive way of thinking that doesn't seem to play well with computers - go figure ;-)

Rumor has it that there were 10-20 in goal.  It looks like Jack Brown may have won this one.  The live leader board is down at the moment so I'm in the dark too.

Results will be HERE when they become available.